Harassment seems to be the buzz word in the UK media nowadays. If you weren’t convinced that harassment was a problem, BBC News is telling us otherwise. Here’s a sample of headlines in the past one week:

“Workplace bullying: ‘Fear is the biggest factor’”A quarter of employees think their company turns a blind eye to workplace bullying and harassment, according to a report by the Chartered Institute of Personnel and Development (CIPD).

The Guardian wrote about sexual misconduct in the legal profession in the UK, though bullying is worse: 62% of female respondents and 41% of male respondents were bullied according to the IBA Report. The Law Gazette drills down further:

“677 legal professionals contacted LawCare for help in 2019 – up 8% compared with the year before. The most common problems cited were stress (26%) and depression (12%), while the number of lawyers complaining of bullying rose to 80, up from 47 in 2018. Bullying now accounts for 12% of calls, and the majority of people said they were being bullied by a manager or superior.”

I can give you loads more, but I don’t want to overwhelm you.

In short: Harassment exists. It’s BIG. It’s endemic and it’s got to a point where we can’t ignore it anymore.

In this results-driven and highly pressured world, only a saint could profess, I have not harassed. I remember my own tearing-out-hair moments when someone would tell me something and all I wanted to do was scream at the top of my lungs – Are you f#@*ing kidding me?

That’s how the working world is, right? A colleague, at the end of his tether, and a harasser himself who was being counselled, once drew the Shit to Pay ratio for me. I’ve reproduced it and taken a photo.

He explained, the higher your pay, the more shit you can take. But there comes a point when the shit exceeds the pay. Months later he left. But that stuck in my head. Years on, after raising a Gen Z-er, it dawned on me. Why should we paid to take shit? How incredibly destructive and depressing that feels.

“You know what’s the worst kind of job? Sitting in the office all day. I’m not doing that.”

I used to live in Kuala Lumpur and watch other drivers during the daily commute. They looked glum and would take it out on other drivers. You cut into my lane, you die!

Here in London, people don’t drive but push into crowded trains. That last 2×2 feet of space is mine! They are just as gloomy going to work.

In some workplaces, people aren’t happy. Yelling, blaming, setting impossible tasks, e-mailing workers after hours… All that IS harassment. We’ve fallen into an environment where this is the norm. If anyone were to try to put the breaks on a project (they’ve seen a safety issue, someone’s skipped a compliance step, or the company’s short term gains causes long term losses), they are seen as adding extra work or causing a coveted target to be missed, and with it, bonuses for that dream holiday.

We’ve really got to think about how organisations, their structures and their targets are putting immense strain on ordinary human beings.

Today, Lloyds Banking Group CEO Antonio Horta-Osorio opened up about how being unable to speak about the his worries of turning an ailing bank around affected his mental state.

“I was very mindful that the bank was in a very weak position to face adversity. It was a problem that was going around my mind constantly, which led me to sleep less and less. And the less and less sleep progressively led me to exhaustion, and then to not sleeping at all which was a form of torture so I had to address it and I did”. 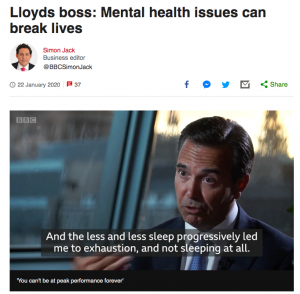 Horta-Osorio was self aware enough that he needed time out and with the Board’s permission, took eight weeks off to recuperate.

What about all those stressed CEOs who feel they can’t? Would their stress pass on to the next level – managers whose only way to handle it is to take it out on their subordinates? By yelling, blaming, setting impossible tasks, e-mailing workers after hours… (wait, didn’t I just say this?)

In October, along with Anne Abraham and Marcella Lucas (of LeadWomen), Patti Perez, Philip Ling and Betty Yeoh – we created a conference addressing harassment. Anne brought in the KL Shakespeare Players to help corporate leaders and change-makers understand what harassment looked like and the pain it could cause. In one scene, a manager who was given an impossible deadline by her boss, harassed her team, on WhatsApp late at night. They were responding to a client’s request and as the team tried to explain that they couldn’t do it, she barked at them. At this stage, we already knew that she was burnt out, depressed and ready to pack it all in. Her shit to pay ratio was off the charts. 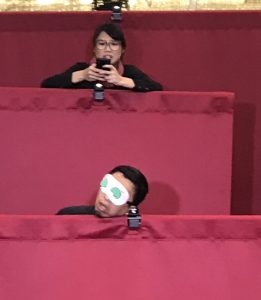 Adam, WAKE UP. WILL YOU SWITCH YOUR BLUE TICK ON SO I KNOW YOU’VE SEEN THIS MESSAGE!!!!

This scene felt familiar to many in the audience. We had all played on of those roles. The client, the big boss, the manager, the team.

When we set a goal or give an instruction – what support are we giving those who need to make it happen? Because giving someone an impossible order can lead to: 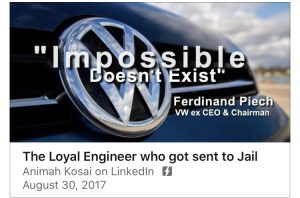 Former Volkswagen CEO Martin Winterkorn created such a strong fear culture, that engineers ended up making a cheat device instead of admitting that a clean and compact diesel engine could not meet the tighter US air emission rules.

Harassment is a symptom. It is not a cause.

So let’s take a pause.

What is really going on here?