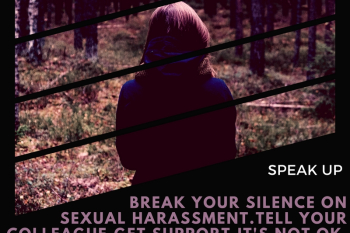 “She didn’t say a word for 3 years?” my male friend remarked on Cheryl Yeoh’s revelation that she had been sexually assaulted by Dave McClure.

He’s not alone. Many men cannot believe why women stay silent. The length of time suggests that maybe it wasn’t true. That the woman was ok at the time, but later, after things happen, she accuses someone of sexual harassment or assault. The greater the time lapse, the more likely the man will doubt the woman.

Guys, let me give a little peek into our inner world.

Women are incredibly stoic forgiving creatures and you love us for that. This means we put ourselves after everyone else. We come last. So if someone hurts us in anyway, we don’t blame the perpetrator. Our first question is, what did I do wrong to deserve this?

We talk about victim blaming yes, but did you know a victim blames herself before anyone else does? It could be that society seems to think it’s ok to blame victims. What was she wearing, did she lead him on, did she say stop at any time?

So are you surprised when a woman thinks it’s her fault? When she blames herself, a whole lot of insecurities arise. It undermines her sense of worth. I have seen the strongest women crumble when they have been sexually harassed. They feel violated and yet to the rest of the company and to their perpetrator, they have to put up a strong front. That includes staying silent. In our male dominated corporate world, silence in adversity is strength.

After blaming herself, a woman thinks of how reporting sexual harassment will affect the perpetrator and the rest of the company.

If I were to raise the fact that my boss sexually harassed me, it would affect his life and his reputation. It might break up his marriage. What about the kids? Plus everyone likes him, they will blame me for breaking up the team.

Thoughts of a typical woman

In Cheryl Yeoh’s case, reporting Dave McClure could mean losing funding for the Malaysian government initiative she was leading. There was too much at stake.

And this is where we play sacrificial lamb: for the sake of the company, I will keep quiet.

When the woman keeps quiet, the sexual harassment often continues. The woman maintains her silence. She tells herself, for the sake of peace among the team, I’ll put up with it. But over the weeks and months, she loses her self esteem, becomes unsure, begins to break down in the toilet after the harasser sends her yet another message, or tries touching her again. If she can’t take it anymore, she resigns quietly. The perpetrator stays. And finds another victim.

If you see a once confident woman withdraw, that’s a red flag. Reach out to her.

One day, something breaks – for women this can be after several years. In Cheryl Yeoh’s case, it was seeing how the men rallied round Dave McClure after his “apology” (I’m sorry I’m a creep) following the New York Times expose on women tech entrepreneurs facing sexual harassment.

And this is when the unbelievers come in. The moment a woman reports sexual harassment, she is subjected to incredible stress. Do you have evidence? Many don’t. I know of cases where women were so distressed by getting phone messages or dick pics, that they would immediately delete them. A woman doesn’t think of how to build her case, she thinks of how to get that person out of her life. It’s hard to think straight.

This is when the limbic system kicks in: Flight, Fight, Freeze. Too often, it’s FREEZE. I’ve encountered this myself as a teen sexually molested by a man on a bus. I was petrified and didn’t know what to do. I was lucky that some passengers noticed my distress and got the conductor to throw the man off the bus. This is why it’s so important to intervene. Most women cannot do anything at the time. If you see something, you must speak up and support her.

That point at which I was assaulted I was in a state of shock. And that shock can last a while. That question, did that just happen to me? Why, how?

And the horrible feeling of violation.

Women can be very attuned to their feelings and it plays out in their minds over and over: did that just happen, what did I do wrong, I can’t get him into trouble, I can’t break up the team and she comes to the conclusion that her rights are less important than the deal, the team, his family.

If the woman does decide to report, her first question is, “will they believe me?”

I watched the start of Broadchurch season 3 last night. During a police briefing about a rape where the victim took a few days to come forward, a young officer asked, “do you think she made this up?” Olivia Coleman turned on her with great ferocity, “we always start by believing the victims!”

Sadly, in many organisations, HR tends to start from a place of disbelief. He is innocent until proven guilty. I’m knocking that out right now. If you are investigating sexual harassment within an organisation or industry, you are not required to follow the high standard of proof of a criminal trial. Your duty is to protect your employees. You start by believing her.

When a woman has been harassed over time, she is vulnerable. She looks at the world around her and sees women who dare speak up get lambasted over Twitter, over Facebook, and on TV (think Fox). She doesn’t have the strength to deal with accusations that she is a liar, that she didn’t dress modest enough, that she has drinks after work with men. She doesn’t want her life under scrutiny. I’ve seen remarks by men who say things like “she’s too ugly to rape”. Where does that come from? What do such haters get out of putting a woman down?

The world is a very unsafe place for women to speak up. It takes an incredible amount of courage. Women like Susan Fowler, Lindsay Meyer and now Cheryl Yeoh had to think long and hard before going public. It could mean career suicide, isolation and public ridicule. But they have seen something bigger, they need to break their silence to make the working world safe for other women. For that, I applaud you.

This article was originally published on Animah Kosai’s LinkedIn page on 5 July 2018 shortly after the New York Times expose on Silicon Valley sexual harassment and by e.27.co

Speaking Up against Wrongdoing