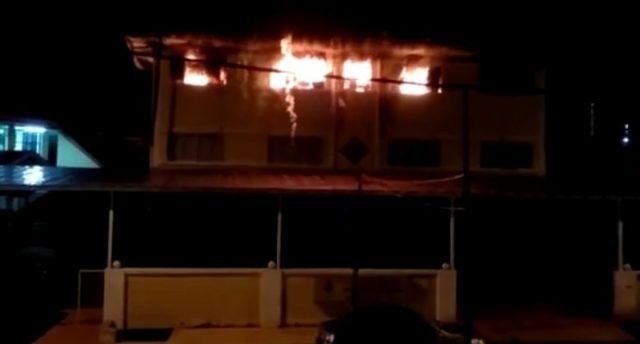 Today, 23 people, 21 of them children, died in a fire in a religious school in Kuala Lumpur.

It was before 6am and they were sleeping in rooms locked from the outside. The windows were grilled. They were trapped. Witnesses described the screams and one said he saw hands at the window. I cannot begin to imagine their last moments of pain and the enduring pain their families have to live with.

The building did not have a fire safety certificate. The law prohibits occupation until there is a certificate confirming that the building meets fire safety regulations. For public premises, this includes sprinklers, fire alarms, fire extinguishers and several accessible evacuation routes. The fire certificate must be renewed every year and mandates a fire drill involving the fire and rescue services.

Under the law, the owner/operator of the building is responsible for the safety of residents. Failure to have put in place even the most basic of fire safety requirements means that they are liable.

Many Malaysians are in shock and calling for action against the school owner.

The problem is that Malaysia has a poor history of taking action against religious schools, known as tahfiz schools. In April, Thaqif, a 11 year old boy died a few weeks after being beaten by a warden. The post mortem issued in July revealed that he died from leptospirosis (infection by rat urine). To my knowledge, the warden was not charged. There have been allegations of abuse and sexual abuse in religious schools but until today, not one person has been brought to book. Through a loophole, these schools don’t fall under the Ministry of Education, but under state religious authorities.

In August, The Star reported that the Fire and Rescue Department was concerned about the fire safety measures at unregistered and private tahfiz (religious) schools, having recorded 211 fires involving them since 2015.

On May 7, another such school in Sabak Bernam, Selangor was destroyed in an early morning fire, but no one was hurt.

There were 519 tahfiz schools registered nationwide as of April, but many more are believed to be unregistered.

The principal of the school, Muhammad Zahid Mahmod said:

“God willing, they died as martyrs.”

That makes it all right then?

This man and the building owners should be charged with manslaughter for failing to ensure safety of the students who died under their care.

Instead, the Malaysian culture seems to be “it’s God’s Will”. We have blamed God for construction accidents, motorway accidents and fires. It’s easier to put disasters on God rather than face our own culpability.

There is a reluctance to take action against religious schools for fear of appearing anti-Islam. We are in awe of people who can memorise the Quran. They can do no wrong. Even if children die, they are not to be blamed. We have to end this deferment culture now!

Religious teachers and leaders are human like the rest of us. They need to be held accountable like everyone else. The fact that we don’t, enables them to gamble with our children’s lives. Instead of spending money and putting in place the requirements to meet safety laws, they say, “Insha Allah (God Willing), nothing bad will happen.”

What do we do now?

Dr Hartini Zainuddin, a child rights advocate is well aware of the stringent fire safety laws having set up refuges for street children in Chow Kit, Kuala Lumpur. She suggests:

“Ministry of Women and Education have to call all these state run homes and schools in for a meeting.

1. Insist on registration and license. Those who agree get amnesty and support, those who don’t, get shut down and fined. Remove kids

2. All regulatory bodies whose approval is needed for registration and license process, do so quickly and rigorously. Assist with revisions where needed. Call in support from NGOs and groups to help facilitate application of license. There’s no reason to wait more than a year.

3. Parents should be educated- no license, no school, no boarding. Don’t enrol child. Check.

In the meantime, hold this school officials accountable if negligent.”

Is it a coincidence that the fire happens on the day the Grenfell Tower inquiry in London begins? There will be lessons there as there are lessons here.

Will the parents sue? A mother, Mazzaini Muda, whose son has yet to be accounted for said:

“Police have yet to confirm (whether my son is one of the victims) but what I heard is that he’s gone because they can’t find him at the school.

“I accept fate and I’m happy that Allah has chosen him to be a syahid (martyr).

Edit: Zalina Jamaludin, also ex O&G is doing a call out for Malaysian safety people who are interested (only serious ones!) to volunteer and teach basic safety drills and procedures to schools (such as tahfiz schools) in the wake of today’s fire incident that killed more than 20 children. You can find her in the comments section here. I believe there will be more people willing to coordinate – do tag me so I can spread the message for you.

Why I do this? Oon Yeoh interviewed me in the New Straits Times recently:Speaking Up On Wrongdoing.

If you have a story of corporate whistleblowing you wish to share, you may contact me on LinkedIn, Twitter @SpeakUpAtWork or e-mail me at animahspeakup@gmail.com , and with your permission I will share your story.

Deepwater Horizon: Because Every Dollar Counts

Peering into a Psychopath’s Bag of Tricks: Slaps and Sexist Remarks