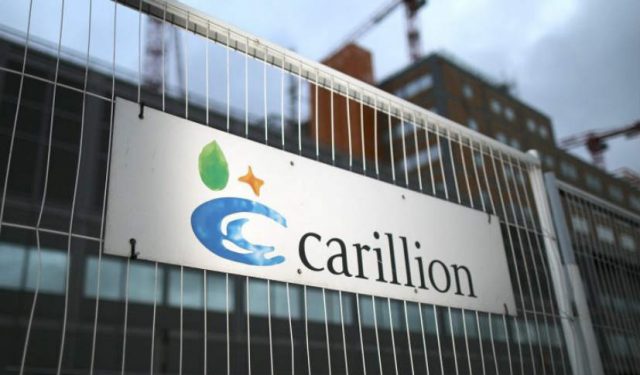 I read The Guardian this morning (despite it’s #GuardianNewLook, argh!) and many questions sprung into my head. Who would continue to award contracts to a company that’s clearly in dire financial straits?

The British government, that’s who. The current government through David Davis declared that one doesn’t need to be clever to negotiate Brexit talks. With that attitude and incompetence, why should I be surprised that they don’t have the intelligence to see that awarding a company that is hundreds of millions in debt, to build public infrastructure is astoundingly negligent.

If the British cabinet were a company management committee, the board would have sacked them long ago. David Davis, for one, clearly doesn’t qualify to work in the private sector.

The Guardian says, “Trade unions branded Carillon, “a textbook examples of the failures of privatisation”

No Jeremy, if the government can’t even pick the right contractor, how on earth can it construct buildings and railways?

When I have the time, I’ll dig up the supporting literature – but this is what I know:

Here I pick up facts stated by The Guardian and explain how this would work in the private sector with good corporate governance.

1. “Companies such as Carillon have to keep projects on budget and keep winning contracts, or problems loom.”

This suggests a cash flow issue. Big contractors would typically use project funding and allocate resources for that project only. Money from the client would stay within the project – be used to pay the project sub contractors, suppliers, workers, service loans and other costs for that project only. If the revenue of an ongoing project is used to fund another project, it can jeopardise the first project’s cashflow.

This statement sounds as if new contracts were needed as a roll over to sort out financially troubled older projects.

2. “In July it shocked the stock market with a massive profit warning: a £845m write down related to key contracts including the new Royal Liverpool hospital.”

The Construction Index reports that in April 2017, Health minister Philip Dunne admitted, “unfortunately the construction work has been subject to significant delay.”

In response to a written question from West Lancashire MP Rosie Cooper, the health minister explained: “The reasons for delays to the construction timetable have been the discovery of asbestos; issues with using cranes in high winds; a delay in completing a new electrical connection and more recently, the discovery of cracks in some of the concrete beams, for which all remedial work has now been carried out.”

Now if you thought that wasn’t bad enough to put the company on a poor performance list, wait for what comes next…

3. “The construction and outsourcing group issued the first of three warnings about its financial health in July, in an update that sent its share price tumbling and forced its chief executive to step down.”

“A week later, Carillon was awarded the £1.4bn contract to work on the HS2 high-speed rail link (with a French company) and a £158m contract from the Ministry of Defence to provide “catering, retail and leisure, together with hotel and mess services” at 233 military facilities.”

2. Is a company’s track record a key criteria for evaluation? For example, would these criteria disqualify a bidder:

3. Can the client, in this case, the government overrule its tender essential criteria and qualify a bidder that is not technically qualified? Who makes this decision?

4. How many bidders were there for HS2? Was Carillion possibly the only British bidder of the size required to undertake these projects?

5. Are government contracts audited? Does this include how tenders are awarded, whether the process is followed and oversight of the projects?

6. Does the government conduct risk assessments of its major contracts? Especially when conditions change – Carillon blamed the unexpected drop in the pound after Brexit and a slow down due to Brexit and low oil price.

A company will not award a large contract to a bidder that has financial difficulties of such a magnitude. The risk to project delivery is too great. If the bidder falls under liquidation or receivership, their bank loans immediately become due and there goes the project. Yet the government awarded them with full knowledge of the risks. This is gambling with public money. In my view this is negligence, and whoever was the decision maker (individual or committee), strong punitive action must be taken.

To be fair, Carillion’s 2016 accounts didn’t ring alarm bells, but the July profit warning should have.

It also raises questions about the accounts – how were revenues, cash flow and contingent liabilities presented?

The fact that the Cabinet has convened a COBRA (not a snake but a Cabinet Office at Briefing Room A) meeting this afternoon shows the seriousness of one company’s collapse on a governments ability to deliver projects and services. This is not a failure of privatisation but rather a symptom of awarding contracts to a dominant companies rather than smaller capable ones. I don’t understand how a construction company also provides school meals and cleans train carriages.

Governments around the world don’t have the business savvy in overseeing contractors. Contractors are smart – they bid low for contracts with ambiguous specifications. When the client specifies how it should be done, or discovers a defect – wham – there goes a variation order with an increase in costs and an extension of time. It’s harder to fool clients in the private sector who understand the game only too well.

Unlike companies, it’s hard to point a finger at an individual within governments saying they mismanaged a contract. They hide behind committees and ministers. In some countries, public officers and authorities have immunity from lawsuits. This lack of accountability with the sense that it’s not my money has caused a lackadaisical attitude.

I have no issue with Carillon failing, and it’s good that the government has resisted a bail out. I have sympathy for the workers – but remember, many were hired on the back of projects which should not have been awarded in the first place. It is likely that the ordinary worker can continue with the projects under a new regime – whether it’s a competitor, the liquidator or some entity hired on behalf of the government. The ones who really lose are the taxpayers and the public.

Carillon shows that the UK government’s management of its contracts lacks proper governance. SFO may have been all over companies like Tesco and Rolls Royce. The same diligence and questions need to be applied to government procurement with a focus on conflict of interest. It can save the taxpayer billions.

Do Men Get Sexually Harassed?

Powerful People are Afraid and Human. Just Like Us