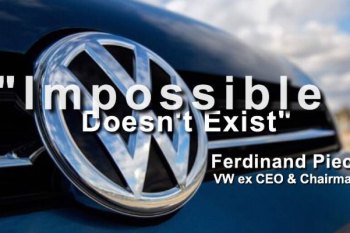 I enjoy working with engineers. They are clever, focused and crack bad lawyer jokes. When up against a brick wall, the engineer gets creative. Reverse engineering, cross industry innovation – the engineer’s mind at work is fascinating.

Imagine the joy when the Volkswagen design team danced outside the box. There was no way they could meet the US emissions standards and keep their affordable and fuel efficient engine. How would they achieve their goal to conquer the US market and the ultimate prize as World Number One?

There is always a solution. And they found it. Changing the engine was a dead end. So focus on the emissions test. How can the engine pass the test? Viola! The cheat device was born. A software that would recognise when the car was being tested and change the amount of NO2 emission while under test conditions.

If I had been in the room when this was mooted, I can imagine my awe at the sheer audacity and brilliance of this solution. Then my conscience would kick in. I imagine the scene.

Wait a minute, isn’t this… cheating?

But when it goes on the road, it fails emission standards.

We just want to pass the test man, no one measures it afterwards.

In a world where we measure people by test results rather than their true abilities, why are we shocked? We tell our kids, just pass the test.

You only cheat if you get caught.

Robert Liang was part of the team. He pleaded guilty to his role in “a nearly 10-year conspiracy to defraud U.S. regulators and U.S. Volkswagen customers by implementing software specifically designed to cheat U.S. emissions tests”.

The prosecutors asked for 3 years. US District Judge Sean Cox sentenced him to 40 months, saying:

“The conspiracy perpetrated a massive … and stunning fraud on the American consumer that attacked and destroyed the very foundation of our economic system,”

In asking for a house arrest rather over jail, Liang’s lawyer Daniel Nixon, said Liang was not a “mastermind” of the emissions fraud. Liang “blindly executed a misguided loyalty to his employer,”

Let’s think about this. A top notch engineer is not clever enough to step back and think, this is wrong?

No one else yelled Stop. 6 other executives have been indicted for their roles in the conspiracy.

Who gave the Orders?

So let me put this bluntly.

If you do something illegal because your boss tells you to, he’s not going to bail you out.

You are on your own.

There are those who followed their boss’s instructions and ended up in jail.

“Not once in my 40 years there did anyone say to me, ‘Annette, this is not the way it’s done in the real world… I thought I was doing my job as I thought it should be done.”

Annette Bongiorno, Bernie Madoff’s secretary upon being sentenced 6 years for the ponzi scheme

“She was compliant with everything and questioned little,”

Committing a wrong act through blind compliance can put you in jail or kill people.

Had TEPCO engineers spoken up against the unsafe conditions at the Fukushima power plant, would the nuclear plant have leaked? Six years on, Japan reels from its effects.

Telsa engineers have done exactly that in designing and testing self driving cars. WSJ reported last week the dissent in the ranks:

In a 2015 email, Mr. Rose [Robert Rose] who led Tesla’s Autopilot Group urged engineers to get started on validating the technology, or to proving it works in tests, “RTFN”—right the f— now.

Some engineers and suppliers pushed back. Issues they debated included the amount of time a driver would be given to retake the wheel if a car’s autonomous driving features stopped working; mechanisms to keep drivers engaged; and whether the technology should be allowed on all roads.

Engineers have resigned when a company won’t listen.

Evan Nakano wrote in his resignation letter to Tesla that Autopilot’s development was based on “reckless decision making that has potentially put customer lives at risk”.

The famous GE Three, Gregory C. Minor, Richard B. Hubbard and Dale G. Bridenbaugh, resigned in 1976 stating that General Electric’s Mark 1 nuclear reactor was flawed, leading to congressional hearings and a threat to the future of nuclear power.

These engineers speak up in the face of intense pressure. More would speak up if they felt safe against retaliation. They are after all human, with families to support.

The reality is that in some organisations, the dissenting engineers are seen as trouble makers with HR as the silencing hired whip. It’s time management listens when engineers speak up. It could be a matter of life and death.

Special credit to my daughter for the cover graphics design.

I worked as counsel alongside engineers in the Oil and Gas Industry for almost 15 years. Lawyers and engineers speak a different language. But we do share: logic and unwavering integrity. I write for all the engineers I have met, and argued with.

I spoke on Volkswagen and Fukushima culpability during a talk given to Clifford Chance Singapore on 21 June 2017. The slides are available here.