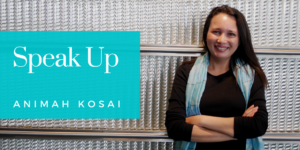 Animah draws upon her 24 years experience as a lawyer and counsel in the oil and gas industry. She worked as legal counsel for Schlumberger covering South East Asia (except Indonesia) and India. She became general counsel of Carigali Hess, a joint venture between Petronas Carigali and Hess, which is a major gas producer in the Malaysia-Thai joint development area.

Animah was called to the Malaysian Bar in 1994, serving on the Kuala Lumpur Bar Committee and as Chairperson of the KL Bar Environmental Law Committee in 2002/3.

She is now based in London where she writes and speaks on Speak Up, with associates in Malaysia and the US.