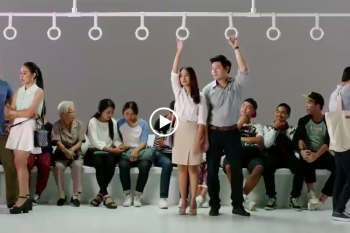 “Last night my friend was sexually assaulted in the LRT … A man pulled his penis out of his pants and rubbed it against her bum. She screamed for help. Bystanders laughed. @MyRapidKL’s staff didn’t help and let the perpetrator walk away. TWICE.”

Despite the awareness with #MeToo, no one came to this woman’s aid and the Malaysian transport provider, RapidKL failed her.

If that had happened to me when I got molested, I would have felt betrayed and lost hope in humankind.

When I was 17, I was molested on a public bus. I got on at the first stop, Klang Bus Stand. A man, twice my age, came and sat next to me. There were many empty seats. I was trapped between him and the window.

After a while, he put his arm around the back of my seat. His hand gradually landed on my shoulder and began caressing it. I can’t remember what I did. I might have flinched, I might have mumbled, “please stop.” Then, his other hand touched my thigh and gradually it went under my skirt, inching its way upwards.

Again, I can’t remember what I did or said. I froze, thoughts running through my head. Is he really doing this? What will he do next? If I get off at my normal isolated stop, will he rape me? There were others on the bus. What should I do?  I sat, numb for 2o minutes. It felt like eternity.

Today, I am a lawyer, confident and trained in sexual harassment. Then, I was a shy young student. I was terrified. I didn’t even think of screaming or speaking up. I couldn’t think straight.

A young woman noticed my distress. She got her boyfriend to accompany her to my seat. “Hi, it’s been so long since we saw you,” she said, “come join us.”

Saved, I gratefully got out of my seat. I am sure there were tears in my eyes. There are tears now as I write this. There are tears each time I recount my story during my anti-harassment training. You never really get over this. The sheer terror of being molested. The absolute relief at being saved.

I sat down with the couple. She asked me what he had done. I told her. They immediately informed the conductor, who promptly threw him off the bus. In today’s world, we’d expect a proper police report. But this was the 80s. It was different then.

It was too dangerous for me to get off at my stop, near where he’d been thrown off so I followed them back to her place, to calm down.

I will always be grateful to that couple, for noticing me, getting me out of a risky situation and taking action against the perpetrator.

Dhabitah’s friend was less fortunate. Her bystanders laughed at her. She was not saved. And in today’s social media world, she suffers the indignity of the “what did she wear” comments.

My suffering was private. I was not judged by others. I judged myself. For all of 24 hours I blamed myself for wearing a short skirt. I vowed to dress like a nun for the rest of my life. Fortunately my mother set me straight. “Then you’ve let him win,” she said. So I still wore short skirts but sat next to old grandmothers, and for a long time, I did not take the window seat.

But at least I was alive. I had not been physically hurt or raped.

For my sake, for Dhabitah’s friend’s sake, for every single woman, man and child’s sake – if you see someone in danger, INTERVENE!

If you are alone and feel unsafe, tell another passenger, we need to do something.

Don’t wait for someone else to do something. Because guess what, they are all waiting for someone else to take that first step. It’s called the Bystander Effect. People are more likely to act if they are the only witnesses. The more people witnessing a situation, the less likely anyone will step forward. This is psychologically proven. This video shows how people acted when smoke filled a room. A person alone will raise an alarm. A group of people will wait for someone else to raise the alarm, and they wait longer and longer … until it can be too late.

Some decades ago, a department store fire in Northern England killed a number of people in the top floor restaurant. Despite seeing the smoke, the patrons did not leave as they were waiting to pay their bills. No one wanted to be the first. I can’t remember if this is the Manchester Woolworth’s fire or the Liverpool Hendersons fire. If anyone has the details, please let me know.

We fear for our own safety or being judged by others if we do intervene. So first, make it safe. Get others with you. The woman who saved me, had a big boyfriend. As for being judged – get over it! Someone’s wellbeing is at risk. And in the youtube video and the restaurant fire, that could be your own life!

So how can you intervene?

For the victim: be a supporting shoulder. They are often too shocked to know what to do.

For the perpetrator: report to the relevant authority (eg the police and the operator of the transport/hotel/restaurant/college, depending where the incident takes place).

Taking photos and videos are helpful, but be mindful not to antagonise the perpetrator or put yourself or anyone else in danger. Many public places do have CCTV. I have never been comfortable with social media posts showing perpetrators (and definitely not the victims) as it whips up a vigilante storm. Send your images to the law enforcers and operators instead. They will handle it according to the law.

By stepping in and speaking up, you can make a difference. You could be saving a life.