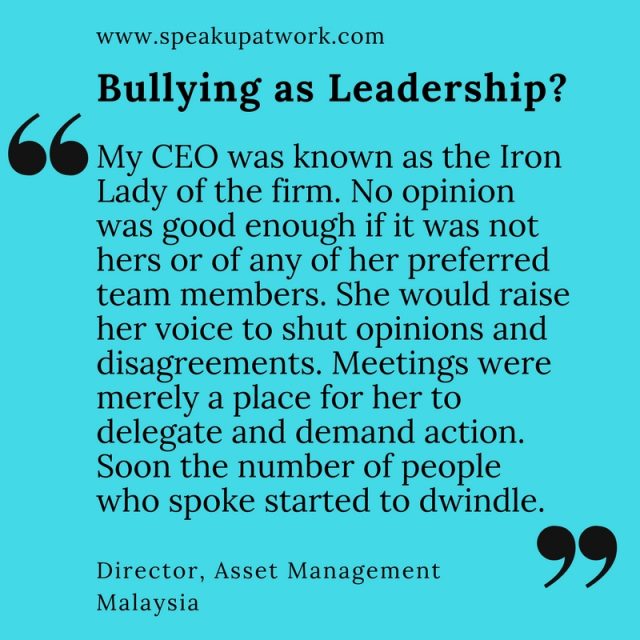 I worked for an established asset management firm for a number of decent years. My CEO was known as the Iron Lady of the firm. No opinion is good enough if it was not hers or of any of her preferred team members. She would raise her voice to shut opinions and disagreements. Meetings were merely a place for her to delegate and demand action. Soon the number of people who spoke started to dwindle. If you have no numbers, not well known by the stakeholders, not an A-start employee, then your opinion is next to nothing.

Employees would dread being invited for her “Coffee with CEO” session. Department heads get worried if their staffs are called for such meetings. It was her platform to gain input and bullets for the supervisors. She would then share the information collated merely to put one down in front of the other audiences, in this case, senior management of the firm.

As her direct report, I started to feel the pressure. I began to doubt my abilities. No amount of preparation and readiness could get me through her bullying, at meetings mostly. She believes “dividing and ruling” works best. A lunch with her non-allies in the office would get me into a heated discussion. To her, if you report to me then you move with the people who support me.

She delegates almost everything. No explanation given. If you are stuck, then be greeted by her most used phrase, “I don’t know, you go and figure this out!”

Her supervisor once told me, “You should stand up. She is bullying you in meetings.” I did. One thing led to another. I decided it was a battle that was draining me. I left the organisation despite holding a senior position, years of good service and most importantly a much loved family at the office.

I started having this thought…bullying may be a form of leadership. Seeing many talented colleagues leave her kind of reinforced my fear. I am not sure if the Management is aware of her bullying antics, or they have turned on a deaf ears and blinded by her ability.