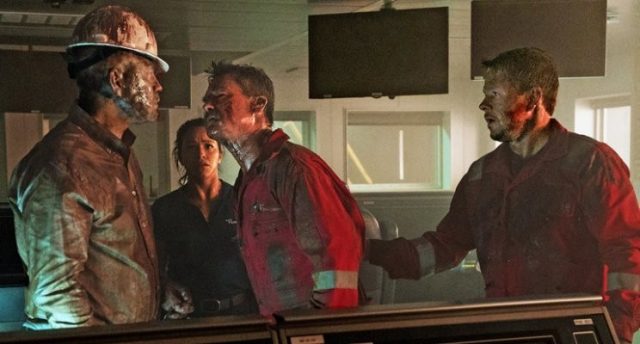 As pressure built up in Macondo below the surface, pressure was building up among the team.

“We are flying by the seat of our pants!” Don Vidrine lashed out at his boss, John Guide, three days before the Deepwater Horizon exploded.

John Guide repeated this to his boss, David Sims, back at the BP Houston office:

“David, over the past four days there has been so many last minute changes to the operation that the (BP rig managers) have finally come to their wits end. The quote is “flying by the seat of our pants”.

“Everybody wants to do the right thing, but, this huge level of paranoia from engineering leadership is driving chaos …Brian (Morel) has called me numerous times trying to make sense of all the insanity…. With the separation of engineering and operations I do not know what I can and can’t do.”

The insanity was Macondo, nicknamed the “well from hell”. Liked the cursed town it was named after in Gabriel Garcia Marquez’s One Hundred Years of Solitude, it was temperamental. You would be too if you had a bottom hole pressure of 13,000 psi.

You might be inclined to kick, a lot. Macondo kicked. A kick happens when oil or gas enters the well while drilling and can shoot up to the surface. High pressure wells are like aggressive pit bulls. The Cesar Milans of the drilling world are trained in well control. You don’t just wing it. You plan, with experts who understand how to tame the beast.

The engineering team with their contractors draw beautiful plans on paper, literally, the DWOP, pronounced Dee-Wop (Drill Well on Paper). A plan would have an objective, for example to drill to a certain depth or at a certain angle to assess volume and depth of oil within the rock. The plan considers that most delicate balancing act: Pressure.

“Pressure pushing down on me

Pressing down on you”

Apply too much pressure and the drilling mud pushes into the formation reducing pressure within the well bore and can cause a blowout. As less mud returns to surface, this is called” lost returns”. Too little pressure and the well kicks. A kick unprotected by the safety barriers along the well, turns into a blowout.

Macondo both kicked and swallowed mud.

“It was as if God had decided to put to the test every capacity for surprise and was keeping the inhabitants of Macondo in a permanent alternation between excitement and disappointment, doubt and revelation, to such an extreme that no one knew for certain where the limits of reality lay.”

One Hundred Days of Solitude

Investigations and testimonies made after the blowout revealed just how high emotions had gone.

When Macondo decided to kick hard in March, 2010, John Guide was missing. He had gone for a run and his teammates had to make decisions without him. David Sims, fuming, drafted an e-mail to Guide but didn’t hit send. Investigators found his draft.

“You seem to love being the victim. Everything is someone else’s fault. You criticize nearly everything we do on the rig, but you don’t seem to realise that you’re responsible for everything we do on the rig. You seem to think running is more important than well control. Left to go run in the middle of trying to pull the stuck logging tool free. You will not call the rig and the ops room, you have to sneak out of the room and call them on your cell phone or go back to your office while everyone is in the ops room. You can’t sit in a meeting and listen to others’ opinions without arguing with them. You think when somebody has an opinion that they’re demanding action.

“You complain that a bunch of young engineers are throwing out all kinds of wild ideas and it is driving you crazy. You don’t listen, you key on a random word or phrase and then you fixate on that and don’t hear anything else. You’re always defensive and the victim. You seem to not want to make a decision so that you can criticize it later.”

The BP team would have got an incentive bonus if Macondo had gone according to plan. Finish the well under 52 days, and they would get $4,500. If that didn’t happen, they could still get $500 for finishing within 75 days. After that, zero.

They had hit zero.

Framing Macondo: “No one knew for certain where the limits of reality lay”

It is harder to see clearly under pressure. Our sights become narrow, blind to other possibilities.

Professor Ullrich Hoffrage of the University of Lausanne calls this framing which can cause unethical decision making. Framing is necessary for us to focus our attention on a task at hand. For example, in driving a car, you are focused on the road in front. The faster you drive, the less you see around you. You depend on your passengers to point out the scenery at either side of the car, or a signpost if you are lost.

An engineer who is focused on meeting his KPIs and desires his bonus incentive sets his frames accordingly. A group of engineers with the same narrow frame will have difficulty seeing the bigger picture. This is the danger of group think.

It usually takes an outsider with a different set of frames to remind them of other perspectives. This is where higher management plays a role, or another discipline such as safety or compliance.

A valuable way to mitigate narrow framing is to allow diverse viewpoints. The initial plan with a risk assessment should include input from contractors and different disciplines. If there is a change to the plan, again, ensure these diverse views are consulted.

The industry has this process. Known as Management of Change, or MOC, any change to an approved plan must go through a process of risk assessment and approvals.

BP had an MOC process but this was bypassed.

The Accepted Norm: Cowboys will break the Rules

Even the MMS (the US regulator -the Minerals Management Service) approved changes in plan despite no proper MOC. You may have heard of “normalised deviance”, coined by Dianne Vaughn following the Challenger space shuttle explosion. Rather than accept the caution that the o-ring seal would fail below 12° C, the decision makers demanded evidence that the o’rings had failed. As there was no such proof, it was determined to be safe.

In a culture where safety procedures are ignored or overridden without proper assessment, deviation becomes normalised. Rules are broken and nothing happens. If you step in to challenge deviance from the rules, chances are, you would be pressured to withdraw your challenge.

What would you do if you were a young Texan engineer surrounded by more experienced guys who had served their time in the “Gulf” and laughed at you when you tried reminding them of the rules?

After all, what do you know?

You laugh along and pray very hard. Nothing will go wrong.

That burns a building down.”

Calm Voices in the Covid Storm