Let’s start at the beginning.

British rapper Slowthai was awarded an NME award for hero of the year. Comedian Katherine Ryan hosted the show. As they were on stage together, clasped close to her, he said:

“Baby girl… if you want to do something, see me later… you ain’t never had anyone play with you like I’ll play with you”.

The crowd was stunned and yelled “misogynist”. Ryan, the consummate professional, and probably very aware that as host, she couldn’t let it go downhill, brushed it off. The crowd however, held him to account, shouting at him, even throwing things. Slowthai threw a water bottle back at the audience and jumped down raring for a fight. He was escorted out.

But it was clear that some in the audience didn’t share her views, neither did many on Twitter.

Under the UK Equalities Act, sexual harassment is prohibited conduct in an employment context – this may not be an employee relationship specifically, but let’s look at how it’s defined, as explained by Citizen’s Advice Bureau:

Sexual harassment is unwanted behaviour of a sexual nature which:

I’ve been asked this question many times:

“If I crack a sexual joke at work and my colleague laughs along with me, is that sexual harassment?”

Well, no. Because if your colleague found it funny too, and didn’t feel violated, intimidated, degraded or humiliated, then it’s not harassment.

BUT, and this is important: if you’re the boss and you cracked an offensive joke and your colleague laughs along – they might be doing so simply because you’re the boss, but inwardly they do feel uncomfortable. Hands up all those who have laughed along uncomfortably. 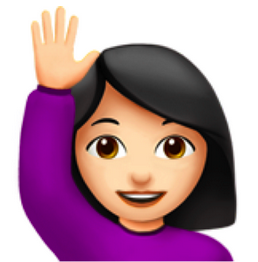 Me raising my hand

Power dynamics count which is why senior people need to be more careful – no one is going to tell you to your face that you have offended them. They might tell another senior person, who would think very hard of how to tell you without you being defensive or retaliating. If you’re the type of boss that doesn’t take feedback too well, it’s likely you will never know that you have harassed someone.

What if you cracked the joke at the water cooler – in full range of other employees. Perhaps you only directed the joke at your colleague, but you said it loud enough that everyone else could hear it. What do you think they might feel? Would they find it funny, roll their eyes, or feel uncomfortable – perhaps even threatened.

I find it easier to explain this in the context of a “gay joke”. If you were to say something, making fun of gay people, knowing or not knowing that five feet away sits someone who has not come out of the closet – what do you think the impact of your joke is? It’s both hurtful and scary.

Let’s look back at the second element of “sexual harassment”: “Sexual harassment is unwanted behaviour of a sexual nature which…creates a hostile or offensive environment”.

What Slowthai said last night, met that second element. You can tell from the reaction of the audience. On Twitter, a number of people said to Ryan, sure, you might have been ok, but what if he had said that to another woman who was not ok?

To his credit, Slowthai apologised and owned his actions. No long excuses.

I hold him to his promise. This is a learning moment. For him. For Katherine Ryan who could have acknowledged how it might have been hurtful for others.

It was great to see the audience call him out. If they hadn’t, he and others, may not have learnt how wrong his conduct was.

Disclaimer: I am a Katherine Ryan fan!

I will be appearing on Kernan Manion MD’s Physician Interrupted podcast talking about sexual harassment in healthcare. Watch this space!

Is it Safe to Report Sexual Harassment? 6 Issues to Consider before you Report