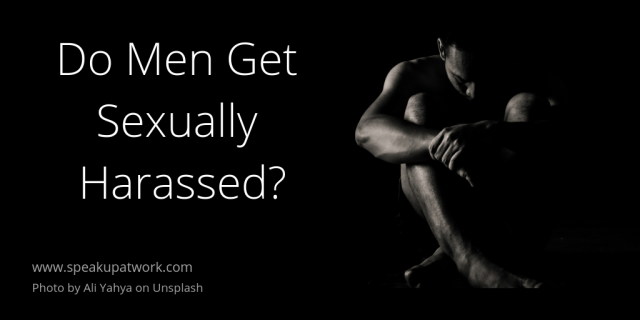 Ask a woman if she knows whether women get sexually harassed, she can tell you her own experience and rattle off a whole list of women she knows who were harassed or assaulted.

Ask a man the same question, he says, of course men get sexually harassed! But he doesn’t know any man who has been. Except possibly himself.

Men just don’t talk about it.

Last week I asked men on Facebook, on Twitter, on LinkedIn and my own friends through Whatsapp.

I got responses from “I think they’re called fantasies” and “not often enough” to a story of attempted rape. With some, my question triggered their recollections of bullying and outright assault.

The joking responses I received were in group chats. But the private conversations revealed something darker. The pain these men were hiding.

Several of them said, I’ve never told anyone before.

It occurred to me that these men were glad someone asked. They were afraid that if they revealed it themselves, they would receive backlash.

“If men complained of being harassed, they could be said to take the gloss of the issues faced by women, which many feminists will say is a serious problem. And complaining men are just inconvenient, selfish and unnecessary.”

I share a few stories here and have changed their names to protect their identity.

Men tend to dismiss verbal sexual harassment although they view it as annoying and definitely unprofessional.

“I was told by a woman at a work meeting, “you are so tall, are you a model, and those blue eyes….wow.”

A woman who was leading the meeting said this to Bob, in front of several other people.

The dynamics in Bob’s case is interesting. She was Asian and he was white. The meeting was in an Asian country and he was on her turf. She was well connected and could determine his prospects in an industry new to him. The words she used sent a signal to the rest of the room – he’s only a good looking object – putting him on the back foot to prove that he was more than just a sexual object. This is a feeling familiar to many women in the workplace.

Fortunately Bob was confident and able to stand his ground. He said to her, “I think you are mistaken, I just dress well, I am fat.” Being 44 at the time, he had learnt quite a bit about workplace power dynamics and was able to stand up to her.

But not everyone is like Bob. Many men and women, especially if they are new to the workplace, can be very affected by such words. It plays into the self belief that they are not good enough.

Scott was much younger, only 18 and felt really uncomfortable when his female colleague in her 30s made moves on him. She sat on his desk and talked to him about private matters. She was wearing a skirt and touched him with her legs. He knew she was emotionally down that week, and in retrospect, realised she was looking for sex.

“She was actually a nice woman. Nice personality and nice body. But for a 18 year old, at that moment you worry too much about all the bad things that might come from it. So you feel overexcited and afraid of what might happen. Finally nothing much happened. She even sort of apologised for her behaviour the next day.”

Akash told me that he would get harassed by men, not women. He is straight and happily married. Men approach him, wanting sex. Some are direct, others approach hm when they are tipsy. One told him he was willing to have sex but wanted to know his dick size first. “If it’s too big,” he said, “we won’t be a good fit.” Akash assured me he was ok. He explained why men don’t report sexual harassment:

“Fear of being disbelieved and being seen as weak is part of the problem. Men have been conditioned not to complain.”

Another man explained, “Should the abuser be women, men are wrongly taught that we must “endure it”, to “man up”. Men are taught not to fight back when being abused by women, as it is unmanly.”

James interned in a small hotel in the 80s. He told me how a more senior colleague attempted to rape him late one night.

He was flamboyant and high-spirited and quite camp. Alone he was a pleasant person, but in a group with drink taken he was loud and obscene. He shouted out that he was going to come into my room and fuck me stupid. I jumped out of bed and bolted the door. That wasn’t enough to dissuade him. I was terrified and trembling with fear as he kicked down the door. He threw himself on top of me and pulled down the blankets and put his hand inside the back of my boxer shorts shouting all the time that he was going to fuck me stupid. When I tried to fight him off he put his hands around my neck and pushed my face into the pillow. I struggled and somehow managed to get free. I fled and hid shivering behind a bush in the garden for the rest of the night.

James quit his job the very next day and, too ashamed to tell his parents, stayed with friends until he could get back on his feet.

This all happened more than thirty years ago, but it still gets my hands sweaty and sets my heart racing when I think of it. I never reported what had happen, neither to my boss, nor to any of the staff at the college, or the police. I wish that I had, but this was the nineteen eighties and these things weren’t talked about.

We often ask why women don’t report assault when it happens. James faced the same emotions as other women: shame, fear, knowing that he would not be believed, and a survivor’s instinct of carrying on with life despite the deep pain and trauma.

Men too are just as keen to join the #MeToo movement.

These past two years, the world has been shocked by the revelation of women coming forward with their harassment stories. Every woman knew they existed, but we never spoke of it openly. Men too are sexually harassed and assaulted, but face deep shame. It’s hard to open up. Let’s give them the space to share their story without judgment. When we call to make spaces safe for women, we need to make it safe for men too, for transgenders, for all people.

How we can help

Over the next few months, as we answer Questions About Sexual Harassment, we will explore what makes workplaces unsafe and how we make them safer. We explore the world of predators and where they can thrive. We explain how you can confront sexual harassers -whether you are a victim, a bystander or the boss.