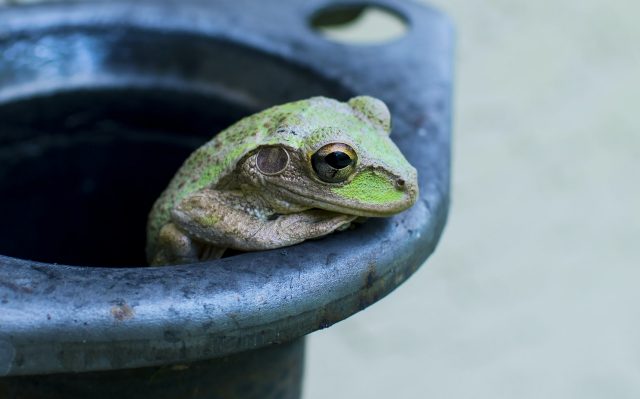 In the good old days when many of us worked in offices, the office environment was a big part of our lives. Mornings getting ready for work could be stressful. Throw in some kids, other stressed adults, squeeze everyone into a car, a bus or a train, move at tortoise speed and then eventually reach your office to… well what exactly?

I was chatting with a good friend yesterday. She was recovering from burn-out. She said, “Animah, you and I have worked in several settings to know which workplaces are toxic and which are nurturing.”

I paused, then said, “we only saw the toxicity after we left. When we’re in it, we are the frogs slowly being boiled.” 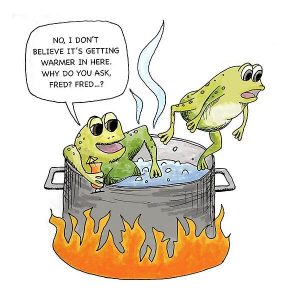 We should be able to hop out, but there is the comfort of being alongside fellow frogs. Misery loves company.

I had worked in a toxic workplace but it was only after I left that I recognized the signs.

The dread on Sunday nights and clenching my hands every morning on the way to work. Arriving at my desk, I’d see the papers left on my desk from my boss the night before, with angry edits in bright red. A “SEE ME!!” on the top right hand corner would give me palpitations. I’d keep my head down the moment the boss walked in, hoping I would not be called up. I found myself constantly holding my breath and praying the end of the day would come fast

I didn’t see it at the time. It was my first proper job and I was warned that the legal profession was tough. My colleagues lived the same life. We thought it was normal. After all it toughened you up.

Normal meant being on the receiving end of sarcastic remarks that reminded you of your incompetence. You were grateful to have a job with them as you had your work thrown back at you. You diligently corrected your work over and over, at the whims of your superior who was second guessing what the boss wanted. You stayed silent in meetings because whatever you said would be met with criticism. You wanted to be invisible.

I became a shell of my former self – a law student who wanted to change the world.

I only discovered that this was NOT normal when I left for another organisation. There, people treated others with respect. The leadership was different. They were interested in what everyone had to say. They invited feedback.

It was like night and day. In the second organisation, I was happy and fulfilled. I was indeed lucky. If I hadn’t been approached, would I have built up the courage to leave? I was already exhausted and had little faith that elsewhere was any better.

At the “interview”, which was really a lunch, I was blown away by how kind my prospective bosses were. In reality they were being decent respectful human beings but I had got to a point that anything not harsh was kindness.

I had been gaslighted. Or is it gaslit? I had settled for a “lesser life”, accepting relentless criticism because I hadn’t seen what was possible.

From victimhood to leadership

Years later, while in charge of rolling out the harassment-free policy and training, I learnt more about toxic work cultures, toxic leadership and toxic follower-ship. Fascinating, but to the victims…. harmful.

That’s the first step. By not realising that I had been in a toxic environment and justifying harassing behaviour towards me, I was unable to protect myself.

Harassment might come from just one person. Or the harasser’s behaviour reflects an organisation’s culture. Where shouting or impossible demands are the norm, even encouraged. In such organisations, people keep their heads down out of fear.

The organisation as a whole may be ok, but there could be pockets – teams who are impacted by a toxic leader. You can tell this by walking through an office, past lively sections and into tense ones where people look nervous and anxious.

We’ve all been there.

Next ask, what do I deserve?

When you’re at work, you deserve to be supported. If you’re junior, you deserve to be guided. No one deserves to be beaten down. I’ve seen executives hoard information or knowledge rationalizing, I worked hard to get this, so you’re not getting it without slogging.

Really? We can’t make it easy for the next person that comes along? They have to suffer too? Imagine how much faster work gets done and new ideas generated when everyone shares.

You deserve to be acknowledged for your work and your skills. Having others take credit is demotivating and keeps you hidden. Bosses that don’t acknowledge you publicly or to their bosses are likely to be insecure, afraid that you would take their place.

I remember at a meeting, when the HR manager complimented my direct report, I said, “yes, she’s got a sharp mind, she’s more intelligent than I am.”

The other managers looked astonished.

I asked, “don’t you want your people to be smarter than you?”

Apparently not. I learnt how the smarter candidates sometimes don’t get hired, thanks to the fears of their prospective bosses.

At its core, it’s insecurity that turns a person toxic. All the more reason that as the economy contracts and people fear for their jobs, harassment is likely to rise. Victims stay silent as speaking up brands them a “nuisance”.

What We Wish For

and that their bosses must be:

Then I ask, is this how you are with your team and with others in the office? Their faces change, because often this is not the case.

Then someone pipes up, “but why should we be this way if our bosses aren’t? It’s not fair”.

And that ladies and gentlemen is why people blindly follow the ways of the leader. Most people.

You can break a toxic work culture, or at the very least influence those around you.

It doesn’t matter what level you are at. You can be the CEO or an intern.

Let me tell you the story of Kak Yah. Kak Yah was a tea lady in an organization I worked in. She was warm, always smiling and a voice so cheerful that you felt her joy and it became your joy. That was her super power.

We worked in a high pressure environment, with incredibly passionate people. Ok, passionate is a euphemism for sticking to your guns and not giving in. I too would be part of the heated debates that sometimes took place in our meetings. Then Kak Yah would walk in. She had that uncanny sense of knowing when to appear. She’d open the door bearing tea and coffee and a huge beam. We all calmed down and lightened up. You could say it was the coffee. I definitely think it was Kak Yah.

When your sunshiny people stop smiling, the toxicity has got too much. You can hop out of the pot. We want to turn the heat off and bring the water back to normal.

In the month of August, at Speak Up Academy, our theme is Healthy and Toxic Organisations. We explore toxic leadership, toxic followership, workplace gaslighting, how to survive in a toxic culture and how to change it.

We have two public sessions that you can join:

Join us on August 10th and share your perspectives on Toxic & Healthy Workplace Cultures. Later in August, we will host panel discussions with experts, and publish a series of posts on this topic. Message me on LinkedIn or contact us if you want to learn more or would like us to conduct talks for your organisation.

On August 24th, our Speak Up Academy panel discusses how organisational culture shapes healthy and unhealthy workplaces, indicators of a toxic culture and strategic interventions. Register here (it’s free) or contact us if you’re interested in a similar session for your organisation.

If you want to be part of the Speak Up Academy’s ongoing discussion around workplace culture, join us! Find out more here.

Do contact us if you want to learn more.