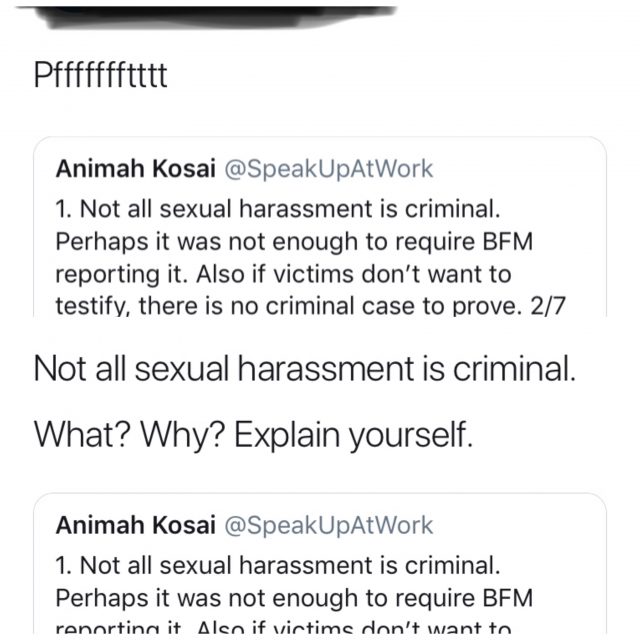 I received a barrage of angry tweets when I said that sexual harassment isn’t a crime. Previously I’d had to explain this to some angry Americans on LinkedIn. Today, this comes from Malaysians, so I’m pulling up some Malaysian law. The law in the rest of the world isn’t much different.

Sexual harassment has happened for decades but only really hit the news in 2016 with Uber followed by Weinstein.

Look at the criminal cases that followed: Weinstein, Spacey and Larry Nassar – they are about rape or sexual assault. Not sexual harassment.

If we look at the gradations of sexual violence: cracking a dirty joke to outright rape, those in the lower realms are called sexual harassment. The more serious ones such as sexual assault are crimes.

None of these are crimes. Do you think they should be? They are inappropriate behaviours and are more serious if there is a power imbalance. A boss for example should not make a sexual remark towards a subordinate. Employees begin to feel unsafe and develop anxiety or depression, even manifesting physical illness.

This is why some countries have laws requiring employers to act against sexual harassment. But many do not.

Public harassment like wolf-whistling is a crime in some countries.

Sexual assault is physically forcing oneself on someone or touching someone in inappropriate places without their consent.

Let’s look at two Malaysian laws which are closest to sexual harassment:

Word or gesture intended to insult the modesty of a person

Whoever, intending to insult the modesty of any person, utters any word, makes any sound or gesture, or exhibits any object, intending that such word or sound shall be heard, or that such gesture or object shall be seen by such person, or intrudes upon the privacy of such person, shall be punished with imprisonment for a term which may extend to five years or with fine or with both.

2. Online Harassment: section 233(1) of the Communications and Multimedia Act

Improper use of network facilities or network service, etc.

Not all the examples I listed above fall within these two laws. To take action, law enforcers (whether the police and prosecutors or the multimedia regulator) need to establish the elements of the offence. Besides the conduct itself (actus reus), they need to establish intention to commit the offence. This is known as mens rea and is a crucial element of a crime. Without intention, no crime was committed* (see footnote).

This is where sexual harassment falls apart.

Here is a typical definition of sexual harassment (there is no statutory definition) contained in the Code of Practice on the Prevention and Eradication of Sexual Harassment in the Workplace issued by the Ministry of Human Resources in 1999:

Any unwanted conduct of a sexual nature having the effect of verbal, non-verbal, visual, psychological or physical harassment:

I’ll give you a minute to find intention as an element.

Wait, What, no Intention?

Typical responses of people accused of sexual harassment are: “it was only a joke,” “I had no intention to hurt her,” “I thought he was interested in me,” “that’s not what I meant. They misinterpreted what I said.”

Sexual harassment is based on the recipient’s point of view. If you feel hurt, threatened, humiliated or uncomfortable by what a colleague has said, that’s harassment. If the remark is of a sexual nature, that conduct is sexual harassment. Intention is irrelevant.

Of course some harassers are fully aware that they are causing distress – in which case intention exists. But some are unaware. Yes, they need to be educated which is why workplace awareness training is important. Sometimes people make remarks without realising they’ve said something wrong. They just need to be told and warned. Not jailed.

When people have grown up in a largely patriarchal society where sexism is the norm and school bullying is common, it is likely they will carry inappropriate behaviours into the workplace. This is not unique to Malaysia. It’s pretty much worldwide. If anyone can tell me a country that has successfully navigated it, I’m all ears. Tell me! We can learn from them.

What Employers Should Do

Employers must establish clear rules and that includes having anti harassment policies. If bosses get away with frat boy behaviour (even if they are women!), you can be sure that there is sexual harassment.

For good corporate governance and to ensure a safe and healthy workplace, employers must be proactive. But not all employers care enough about their people and may not have policies. Then there are the freelancers, the contractors, the volunteers who fall outside an employer’s protection. Don’t even get me started on universities, hospitals, politics and sports – there’s enough scandal to prove it exists. This is why we need stand alone laws for sexual harassment.

If you were shocked that sexual harassment isn’t a crime, then lobby the government for a law. I know that in Malaysia, there is a bill in the drafting stage. Let’s make it happen.

What You Can Do For Your Colleagues

In the meantime, let’s make it safe for our colleagues at work. Here’s what you can do in your workplace:

Let’s channel our anger to making positive change! No one wants to be harassed. Collectively, we can end it.

Animah Kosai left the world of lawyering and Oil & Gas to start Speak Up – helping employers and employees speaking up against wrongdoing in the workplace. She now lives in London where she is writing a book on workplace sexual harassment. Follow Animah and Speak Up on Twitter, LinkedIn and Facebook.

*There has been some deviation in recent years as money laundering and terrorism has become a problem, but I’ll save that for my corruption articles.