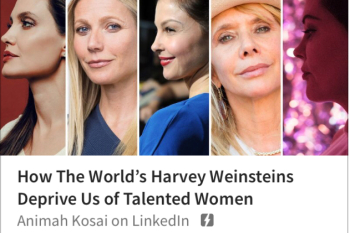 The biggest tragedy of Harvey Weinstein is the women who became invisible after he sexually harassed them.

Sophie Dix and Dawn Dunning left acting because if this was what showbiz was about, they were having none of it. Dix is now a screenwriter and Dunning, a costume designer. Both chose lower risk careers beyond the radar of a lecherous producer.

They stepped away from the spotlight because it was unsafe.

Imagine the talent we have missed out on. Could Rosanna Arquette have blown us away on screen like her sister Patricia and won an Oscar?

We will never know.

We now know he is not alone.

Worldwide, women, and men, at the brink of their careers, have been struck down by power abusing sexual harassers.

Predators loom in every industry. You might have felt them. That accidental brush across your breast. The blatant hints during a business trip, come to my room after dinner, we can discuss your appraisal. Your boss’s straying hand at the back of the taxi as he places your hand on his crotch.

You want to scream. But this man has power over your job. You freeze, thoughts of his wife and kids run across your head. You can’t destroy that. And if you speak up, who will believe you?

After several groping attempts, you dread seeing him in meetings. You pull colleagues in for safety when you go to his office. You wake up every morning with a hole in your stomach. Finally you tender your notice and decide, I was not cut out for this job.

Your next job is a safe one. Away from people. You’ve forgotten your younger ambitions. To be CEO, a top lawyer, a nobel winning scientist. No, not if your wellbeing is threatened.

I’ve lost count of the number of women who have cried telling me their stories. Most resigned. These were well educated women with good career prospects.

One was a senior executive in her 30s. Her charismatic CEO excessively hugged his female employees. She began to avoid him and told her husband who said, leave. She enjoyed her job, but the thought of him depressed her. She knew other female colleagues felt the same. But no one would report him. He was a popular boss. Being touched came with the job.

Another left her tech job after a series of sexual remarks by a colleague who was close to the HR manager. While offering her coffee, he said, “you don’t need cream. You only need to squeeze your breasts.”

Their employers, oblivious to what they had gone through, had lost intelligent, hardworking employees.

Some left the industry altogether. Others became stay at home moms.

In an age where we talk about gender equality and increasing women on boards, we have neglected the toxic workplace where only a handful of women who though sheer luck or by hardening themselves manage to come out on top. Women have to perform harder to overcome unconscious bias, swallow sexism and play the power game with rules set by a few powerful men. Yes, this applies to minorities and to men outside the old boys’ club too.

In the UK, a TUC survey showed 52% women are sexually harassed at work, and 79% did not report it due to career prospects, not being believed and embarrassment. The EOCC in the US states 75% of sexual harassment cases are not reported. My own survey through Speak Up currently shows only 15% report sexual harassment to management. Note: the survey is still live and you can participate here.

Until workplaces acknowledge the seriousness of sexual harassment and its impact on women, nothing will change.

We need to make the workplace safe. How?

This means NO victim blaming. Yes, you can suspend judgment on a harasser, but don’t turn on the survivor. Even questions HR ask like, what did you wear, were you drunk is victim blaming. Question mindfully and be aware of your employee’s trauma.

The outing of Harvey Weinstein is a watershed.

It is time workplaces start talking about sexual harassment. Given that 75% of employees don’t report it, you’d be surprised at what you find if you really start listening.

Once women start feeling safe at work and can focus on their careers, we will see their true talent shine. Right now, more than ever, the world needs women leaders.

Women, We Need You to Make the World Safe