The Australian cricket team schoolboy antics would be funny if it didn’t hurt an entire nation.

Being behind in the game, the boys hatch a plan to cheat. The youngest boy is taught how to rub the ball with sandpaper, which he proceeds to do in full glare of the cameras. When teacher sees this on the big screens, he panics, and like any schoolboy caught in the act, stuffs the evidence down his pants. When the umpires approach, he empties his pockets. What sandpaper? And with the head boy, proceeds to lie. No we did not rub the ball with sandpaper.

I’m not the first to make parallels of the cricket team’s cheat with another famous corporate cheat.

We want to be the biggest car maker in the world. But oh no, America has tougher emission rules than Europe. That kind of stinks given that the US is a way bigger polluter than us. We have to find a way to get around this. Of course we didn’t cheat. Something is wrong with your tests.

It took several years for Volkswagen to get caught. That’s because they got away with it the first year, then the next, and the next. A whole generation of cars grew up with cheat devices.

The Australian cricket team was lucky. It only took a day.

I ask the question everyone has been asking. What if you didn’t get caught? Would you have done it again? And the biggie: Have you done this before?

We all know the slippery slope.

“It is a big shock when our heroes do something wrong.”

Have we learnt nothing from the Greek Gods? They were all fallible. Yes, most of us have moral compasses, but it can swing tenuously depending on several factors: 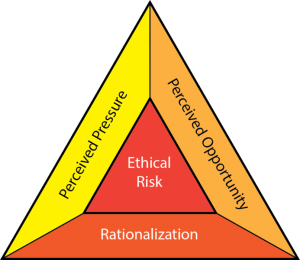 I just described the three points of the Fraud Triangle (Image: Wikipedia Commons).

There’s one more factor which deeply influences whether we will cheat or not. Culture. If everyone around me takes short cuts, then it’s ok. If the big boss insists on results, no matter how we do it, then it’s ok. If my environment celebrates victory and aggression over being kind, courteous and fair, then I’ll go with the majority. After all, I want to belong.

In less than a week Cricket Australia deftly demonstrated the exact sequence of events that forms a corporate scandal.

The Series: Operation Rub the Ball

As I’m feeling playful here, I thought I’d outline the sequence through a series of episodes, Netflix style. Netflix has just rolled out a series  loosely based on Brazil’s Operation Car Wash – The Mechanism which brilliantly describes the unfolding of the biggest corruption story in South America. All stories from the time of the Greek plays to Netflix today follow a story arc.

Here is the arc of cheating or fraud: applicable to sports, the non profit and the corporate world.

Episode 1: The Pressure.  Sets the scene to make viewers understand the motivations behind the decisions the cast make.

Episode 2: The Plan.  Not always as elaborate or clever as Ocean’s Eleven. But most frauds require several people – internal and external with different roles to make it work.

Episode 3: The Execution.  We watch with baited breath as the characters carry out their dastardly deed. It could be a matter of seconds (Australian cricket) or years (Volkswagen). In Oceans Eleven, Twelve, Thirteen and presumably Eight (unless you don’t believe women can be crooks), you want them to get away with it!

Episode 4: Getting Caught.  If this didn’t happen, the scandal wouldn’t come to light. But Episodes 1 to 3 play out in many organisations with ever being detected. In 2016, OECD estimated each year, that 2% GDP and $1.5 trillion to $2 trillion was lost through public sector corruption. Note, if you add private sector corruption, the numbers would be larger. Getting caught increases when people are able to speak up because they trust the organisations to take them seriously and not retaliate. If you don’t have trust in your organisation, you will be stuck in the Episode 1 to 3 loop.

Episode 5: Lying.  From a human behaviour perspective I find this episode particularly fascinating. I’ve interviewed people with clear evidence of their wrongdoing, yet until confronted with the evidence, they will concoct all sorts of lies. Leaders known for their business astuteness suddenly are oblivious to what is going on within their organisations. Or perpetrators lie and conceal evidence by deleting messages or stuffing sandpaper down their pants.

Episode 6: The Reckoning.  Social media, shareholders, advertisers, partners, regulators, politicians and eventually the courts all have their say. How much you lose in business, position, share value and maybe even personal liberty will determine how apologetic you are in Episode 7.

Episode 7: The Apology.  Have the villains repented and learnt their lesson, or is their apology carefully crafted by lawyers and PR spin? You, the public get to decide. We’ve just witnessed Mark Zuckerberg apologise to Congress. The verdict is still out.

The Coach: Darren Lehmann. We can imagine him as the CEO of a company, perhaps like Martin Winterkorn of Volkswagen or John Stumpf of Wells Fargo. He is described by as tough, trying to sort out disciplinary issues.

The Captain: Steve Smith. Let’s compare him to a regional manager, responsible for meeting targets within a region, say North America, a bit like ex HSBC North America head (during the Mexican drugs-money laundering scandal). He’s a likeable guy and wants to please everyone, by winning of course.

The Deputy Captain: David Warren. Maybe like a Chief Financial Officer.He follows the CEO’s orders and will do anything to make the figures look good, meeting the goals. A bit like Carl Rogberg, ex Financial Director of Tesco.

The Junior Team Member: Cameron Bancroft. Like any young engineer, accountant, technician who carries out instructions even though they sound a little dubious.

The Referees: Uphold the rules. They’re the regulators who have the power to intervene and make decisions on the pitch.

The Australian fans: Expect wins and can be harsh when losing. Let’s think about shareholders and the stock market. If the company doesn’t perform, sack the management or dump the shares.

Who cares about long termism. They want wins now, this season.

And in true TV style, I’ve left you with the trailer. Tune in next for Episode 1 – The Pressure: How organisations and their leaders create the perfect conditions for their people to cheat.