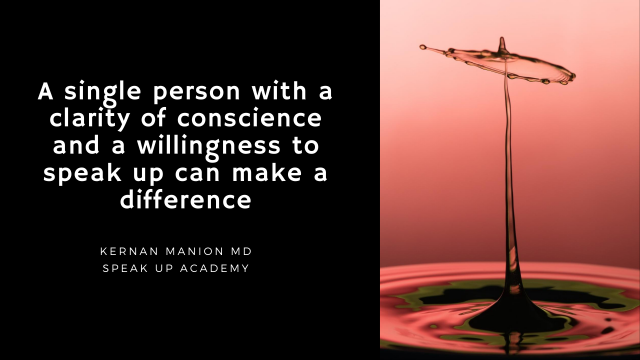 “A single person with a clarity of conscience and a willingness to speak up can make a difference. Contributing to the greater good is a deep and fundamental human need. When a leader, even a mid-level or lower level leader, skillfully brings a voice and a vision, others will follow and surprising things can happen—even culture change on a large scale.”

Now, you might think that this quote is a naive leftover from the Hippies era. “Companies, culture, conscience” existing in the same thought paragraph in today’s dog-eat-dog profit-driven world seems at best immaturely idealistic if not oxymoronic.

But, brace yourself. It’s from “How One Person Can Change the Conscience of an Organization” by Nicholas W. Eyrich, Robert E. Quinn and David P. Fessell in Harvard Business Review 12/2019. Yes, less than a year ago.

It’s a fascinating piece about how India gave pushback to pharma giant GlaxoSmithKline about its insanely priced HIV drug that nobody could afford and GSK actually took stock and changed its pricing radically.

While the concept of “organizational culture” may be somewhat vague to many, literally all of us are familiar with the role that our family culture and the larger role that societal culture play in our lives.

Culture is a lot like a personality style. A person’s personality or “character” style is essentially a collection of beliefs, values, ways of thinking and relating, and ways of communicating and leading. It’s of course influenced by birth temperament, itself shaped by the complexities of DNA and environmental circumstances. But it’s fair to say that we’re all aware that we each have some discernible personality style.

And likewise, the collection of individuals and shared beliefs and behaviors that comprise our families of origin. Even larger, a society can be said to have a personality, while its various ethnic groups comprising it also have their own distinct style, just like the cuisines they enjoy.

Norms,  inherited beliefs, and values powerfully influence the members of any social grouping, whether a family, a membership club, a religious sect or a society at large.

So it should come as no surprise that an organization invariably develops its own style and flavor, its own beliefs, values, norms and rituals.

But … is it fixed, hard-wired into the company’s DNA?

Now, while we understand “culture” intuitively, when we drill down into the specifics,  it gets pretty murky. Even amongst that group of social scientists in the mental health field, there is a large margin of error in correctly assessing that category of maladaptive behaviors that fall under the rubric of “personality disorders,” e.g. psychopathic, narcissistic, schizoid, dependent etc. (Hint: only 5% of the population is said to have a bona fide “personality disorder,” though you sure would’t think it was that low when you go to some social gatherings! Then again, I’m in the US where roughly half the population has lost their minds and the other half is suicidally depressed.)

And that brings us to that contemporary creature known as “the organization.” Back in the ’60s – yes, the 1960s – a fascinating book entitled “The Organization Man” examined the uniquely influential role that corporate culture was playing on the life of the white-collar worker. And while it’s been an interesting study moving forward through the present, the ever-driven bottom-line $$$ focus of that new class of briefcase-wielding scholars known as MBAs has turned its attention predominantly to the mechanics of leadership and the obvious gears of the organizational machine: its mission and vision; its products and services; its market focus, product placement and success; even its long term growth potential and company life trajectory. But that lowly study of the soft science of “culture?” Meh. Apparently not bottom-line $$$ enough.

And yet, what we’ve found in hundeds of conversations with leaders and workers across societies is that an organization’s culture plays a major if not pivotal role in its success. Because, well it’s obvious on reflection, an awful workplace culture or climate is not conducive to people staying on board. They leave, often silently.

But, if it’s so important, why so little attention? I tend to believe that it’s because it’s perceived as “soft science.” It’s like the role that emotional intelligence (EQ) used to play in people’s sense of importance for effective leadership. Before the conceptual model was brought forward first by Salovey and then popularized by Goleman, it wasn’t paid attention to. Why? Because the very knowledge of it didn’t exist!

So we thought it’d be an interesting challenge to bring that elusive entity “corporate culture” more into the light. And since there’s such a diversity of opinion about what it actually is and what influences it, putting it under the SUA microscope might help structure the dialog in a very positive way.

Now, if our hypothesis is correct that organizational culture plays a powerful role in shaping the very organization from which it emanates, then by examining what this elusive dynamic is and what shapes it could be immensely helpful. Because if you could discover that “magic sauce,” the concoction that makes one organizational culture the most fulfilling place to be, and another the most toxic cesspool you’ve ever fallen into, that recipe could help lots of companies and their people. 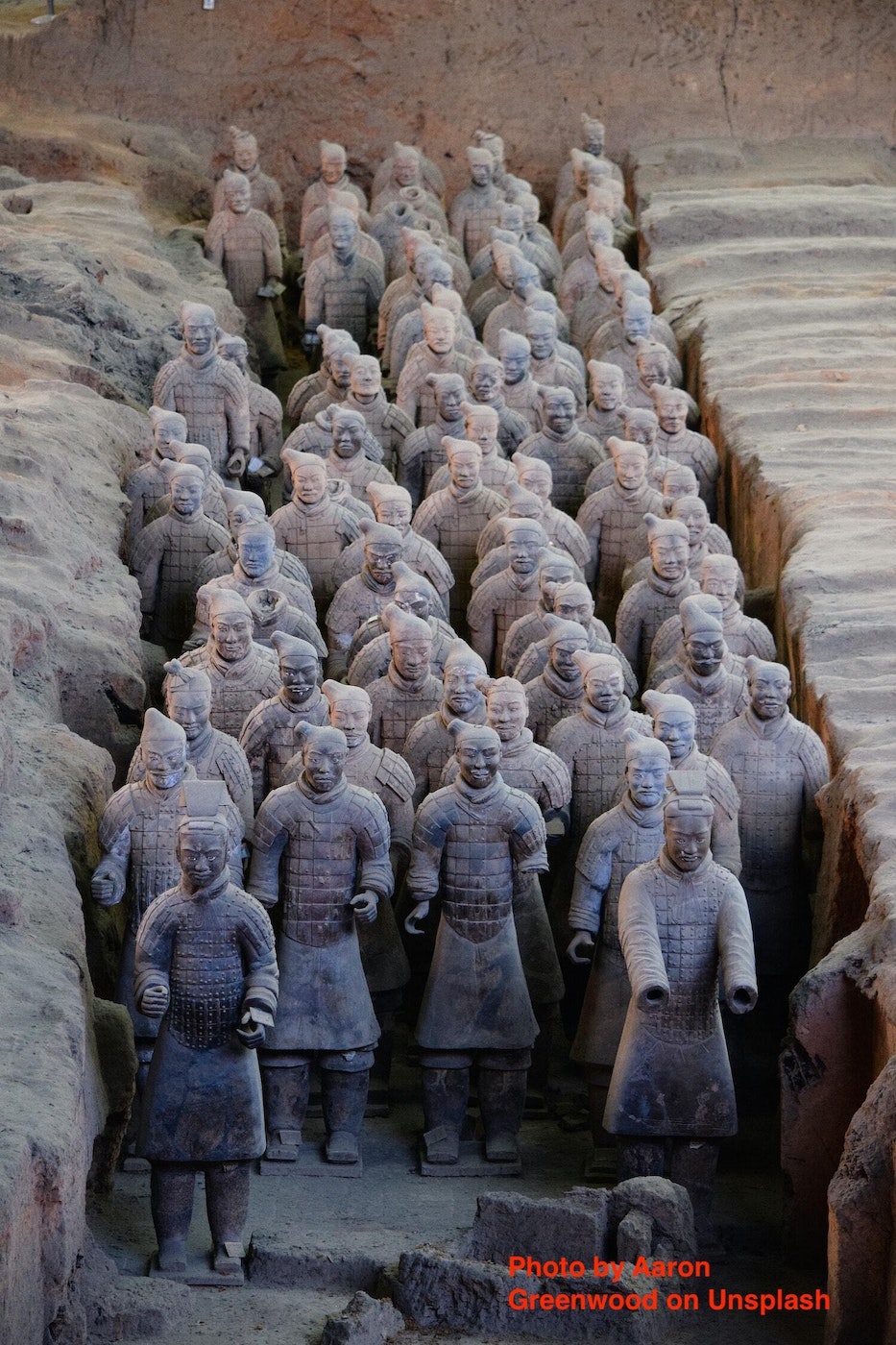 Ponder this for a moment. If you have two sports teams of roughly equal success, one’s a vicious “eat their young” group, the other hard-driving but collaborative and supportive, what might enable the more hostile one to move toward the other style? And, more intriguingly, what could cause the formerly collaborative one to deteriorate into a vicious gang? Bad coach? Bad-apple player? Bad home crowd revving them up toward nastiness? Maybe all, and more?

Now me being one whose sociopolitical ethical leanings lead me to believe that war should never be a first-line strategy of conflict resolution, I’m intrigued by what can help influence the more bellicose into not setting the world ablaze. But for our Speak Up Academy purposes, we’re focusing on what are the drivers – within an organization – which lead it along one values set vs. another. Because that values set drives its behavior and that combined values set and behavior attracts certain others and repels still others, and thus sets the organizational modus operandi on a certain trajectory.

In August, at Speak Up Academy, our theme is Healthy and Toxic Organisations. We explore toxic leadership, toxic follower-ship, workplace gaslighting, how to survive in a toxic culture and how to change it. Here are our free public events: 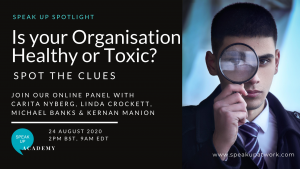 On August 24th, our Speak Up Academy panel discusses how organisational culture shapes healthy and unhealthy workplaces, indicators of a toxic culture and strategic interventions. Get details and Register here  or contact us if you’re interested in a similar session for your organisation. 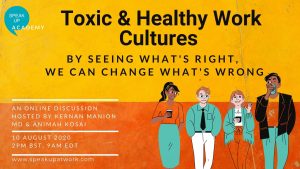 On August 10th, we held an online session on Toxic & Healthy Workplace Cultures which was described by attendees as cathartic and validating.

Contact us if you want to learn more or would like us to conduct talks for your organisation.

In September we will cover safeguarding and upstanding in building psychological safety for organisations.