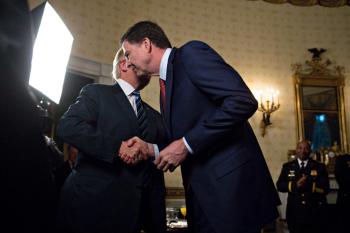 Watching James Comey’s testimony delivered at the Senate Intelligence Committee Hearing in June, I was struck by how human and vulnerable he was.

A big guy, towering above others at six foot eight, the head of the FBI, an institution that invokes awe and fear, admitted that he was just not that strong under pressure.

Very few people are. It takes a certain amount of courage and even foolhardiness to stand up to the person who can fire you. You have to be able to walk away. Your head remains high, dignity intact. The alternative is to obey without question. You keep your job but it’s soul destroying as each day you move further away from your inner values. I have seen the light in bright corporate leaders dim as they feel compelled to drop their visionary ideals in favour of short term gains.

Comey did not drop the Russian investigation despite Trump’s “hope” that he would do so. He was fired.

Trump assured him several times that he would keep his job, and yet Comey could not help but feel disturbed. He ended up taking meticulous notes after each encounter.

“… I was alone with the president of the United States, or the president-elect, soon to be president. The subject matter I was talking about matters that touch on the FBI’s core responsibility, and that relate to the president, president-elect personally, and then the nature of the person. I was honestly concerned he might lie about the nature of our meeting so I thought it important to document. That combination of things I had never experienced before, but had led me to believe I got to write it down and write it down in a very detailed way….

I knew there might come a day when I would need a record of what had happened, not just to defend myself, but to defend the FBI and our integrity as an institution and the Independence of our investigative function. That’s what made this so difficult is it was a combination of circumstances, subject matter and the particular person.”

Two parts of the hearing stood out for me. They were strikingly real. I’ve heard this before from numerous harassment cases.

This is victim blaming. It completely detracts from the point that harassment is wrong to begin with.

If you’ve worked a certain number of years, Comey’s response may feel familiar to you.

During a meeting on 14 February 2017, Trump asked everyone to leave the room, including Attorney General, Jeff Sessions. Comey was alone with Trump. Trump allegedly said, “I hope you can see your way clear to letting this go, to letting Flynn go. He is a good guy. I hope you can let this go.”

How did Comey handle this?

FIENSTEIN: Now, here’s the question, you’re big. You’re strong. I know the oval office, and I know what happens to people when they walk in. There is a certain amount of intimidation. But why didn’t you stop and say, Mr. President, this is wrong. I cannot discuss this with you.

COMEY: It’s a great question. Maybe if I were stronger, I would have. I was so stunned by the conversation that I just took in. The only thing I could think to say, because I was playing in my mind — because I could remember every word he said — I was playing in my mind, what should my response be? That’s why I carefully chose the words. Look, I’ve seen the tweet about tapes. Lordy, I hope there are tapes. I remember saying, “I agree he is a good guy,” as a way of saying, I’m not agreeing with what you asked me to do. Again, maybe other people would be stronger in that circumstance. That’s how Ed [sic, unclear] myself. I hope I’ll never have another opportunity. Maybe if I did it again, I’d do it better.

“Maybe if I were stronger, I would have. I was so stunned by the conversation that I just took in.”

On 11 April, Trump called Comey on the phone. This is after Comey told Sessions that he should not be alone with Trump. On the call, Comey states that Trump asked Comey to “lift the cloud” hanging over him. He wanted Comey to publicly announce that Trump was not being investigated.

FEINSTEIN: You told the president, I would see what we could do. What did you mean?

COMEY: It was kind of a cowardly way of trying to avoid telling him, we’re not going to do that. That I would see what we could do. It was a way of kind of getting off the phone, frankly, and then I turned and handed it to the acting deputy attorney general.

Comey’s problem was that he could not tell Trump directly that he would not drop the investigation and that he would not publicly announce that Trump was clear. It is hard to be straight with a boss who is intimidating, will not listen and has the power to fire you. In this situation three things can happen:

Which would you choose?

Comey went with no 3 and was fired.

In some situations there is a no 4: Tell someone who has the power to support you.

Some senators asked Comey, why did you not tell the AG? This is where Comey was well and truly stuck. At that time he knew Sessions would recuse himself. There was a conflict. With the shake up within the AG’s office (after Sally Yate’s sacking), the deputy AG had yet to be confirmed by the Senate. Other than the FBI leadership team, there was no one for Comey to go to. What Comey wanted was an independent counsel in the AG’s office to handle the Russian investigation but how could he make this happen?

The system had failed him.

And what happens in any organisation, where a person has lost trust, is aware of wrongdoing but has no avenue?

She blows the whistle.

Image of Sherron Watkins, courtesy of CBS News. There have been several famous female whistleblowers – Sherron Watkins on Enron and recently Susan Fowler on Uber.

And this is the “leak” that many have focused on. That he passed his memos of the discussions with Trump to a friend who informed the New York Times.

It’s easy to vilify a person who “leaks” – Snowden, Manning. The more crucial question we should ask is what forces a person to whistle blow at great personal cost to him or herself?

Because the corporate culture is closed, toxic, retaliatory, will not listen to its people and is shrouded in secrecy.

Wells Fargo whistleblowers did try raising the fraud to HR and then resorted to the company hotline. They were fired.

Image courtesy of Reuters. In April, Wells Fargo was ordered to reinstate a whistleblower and pay him $5.4 million. Other lawsuits are ongoing.

Volkswagen did have internal whistleblowers who were ignored (in 2011 and 2012). Unfortunately they did not go outside the company and the fraud continued for several more years (until September 2015).

What does a person do?

I am not American and would not feel as strongly as a patriotic American where a foreign powerful government infiltrates their democratic process. I am aware Trump supporters may read this and focus on the spin that detracts from the core issue. So I ask, put aside the personalities, put aside any leak. And ask, don’t you really want to know what the Russians are doing within your democratic system? Remember this too – Comey, who had been appointed by Obama, had an adverse impact on Hillary Clinton’s presidential campaign. Now he has adverse impact on Trump. That is independence. And that is how democracy is upheld.

We’ve all been pressured to ignore red flags, sometimes by our bosses. Integrity is the courage to do what’s right. If we all lived by this, the world would be in a far better place.

Powerful People are Afraid and Human. Just Like Us

Peering into a Psychopath’s Bag of Tricks: Slaps and Sexist Remarks