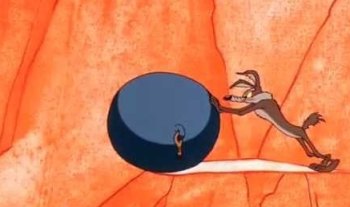 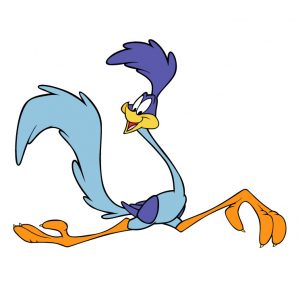 Yes, this is the number one advice given to anyone facing a person with psychopathic behaviours. Stay away. Psychopaths lack empathy and a conscience. Being controlled by one sucks you dry. It’s exhausting and can damage your self esteem.

Don’t even try to play their game. They are better at it than you. You end up becoming manipulative and you ignore your moral compass. One day you realise what you’ve become – a mini version of them. You’ll hate yourself. So don’t even engage. Unfortunately the existence of a few psychopaths in a company can cause others to adopt their behavioural traits because that’s the company norm. I am sure you can think of a few companies with toxic workplaces.

When you can’t run

Running may not be an option for many of us. Robert Hare who developed the psychopath checklist said 1% of the population are psychopaths. Some suggest as many as 21% of CEOs are psychopaths. The higher up the corporate ladder, the more you will find them. They may not be in your workplace but you may find them among clients and other stakeholders.

Here are some coping strategies (I sometimes refer to “harasser” as not all people who adopt these tricks are psychopathic).

1. Be Aware that psychopaths are real, like crocodiles and climate change

When I was young and naive, no evil people existed. They were just misunderstood, or I was wrong. Maybe I could change them. Maybe I was abused at work because I kept getting stuff wrong.

Women especially are susceptible. Give them a psychopath boss and they spend all their time trying to understand him, analyse him and blame themselves. I had a friend who kept buying her boss chocolates. She wanted him to be happy with her. He never was and she was distraught.

Would you try to analyse a crocodile? No. Science now shows that the brains of a psychopath operate differently from most people.

In my last article Peering into a Psychopath’s Bag of Tricks, I highlighted some of the psychopathic traits. Be aware of them and spot the signs as they happen to you.

In my anti-harassment training, we do role-plays where a person confronts a harasser over an act of harassment. The role plays have always been fun and it’s amazing how the harasser actor digs into their inner villain. Here’s an example of how a scene plays out.

Assistant: Yesterday I felt humiliated when you shouted at me in front of my colleagues.

He wants his feelings to be recognised, an apology and hopefully it will not recur. Some employees may want an apology in front of the other colleagues.

Boss: You deserved it. Your reports are always so badly written.

She completely ignores the issue (the shouting) and blames the assistant. She has thrown him a curve ball.

Assistant: I always try to do my best. I work late every night to deliver the reports on time.

Often, the assistant falls for the digression and defends his work instead of pursuing the apology and setting his boundaries.

Boss: But they say your reports don’t make sense. When I give them to management, they scold me and say it’s not what they want. It makes me look bad. Actually you are the stupid one.

Several things here. It looks like there is a blame culture in the organisation and the boss behaves this way because she gets told off too. What she has also done is play the victim (“it makes me look bad”). Guess what normally happens when the harasser plays the victim….

Wait a minute, the assistant who was seeking an apology has just apologised to his harasser.

See how smooth that was? The assistant walks out of his boss’s room feeling bad because he was told his work was bad, he let his boss down, and nope he did not get closure on being yelled at. Instead of establishing his boundaries, he has given her more power to hurt him.

Once you are familiar with the traits, observe how your harasser behaves with you and others. If you are in a conversation with him, be aware of the tricks used. By observing, you also remove yourself from losing yourself in the drama. This will also reduce any confusion, doubt and hurt you will feel if you stay in the drama. 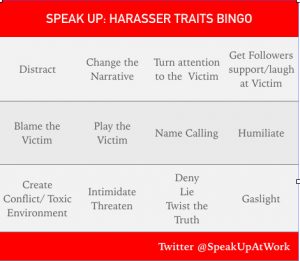 Twelve of the common harassment tricks are in this bingo card. Print it and use it each time you deal with a psychopathic colleague. Put notches against each tactic used. Just by doing this, you have become an observer and removed yourself from what may have been an emotional vulnerable position for you. And it sharpens your ability to detect their tactics. 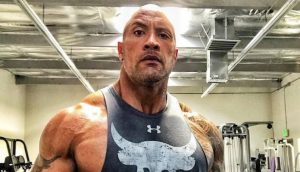 What you find when you google “rock” . But hey, channel him anyway.

A psychopath will throw all kinds of digression tactics your way. It’s easy to get distracted. Come back to the point. Remember your Rock (your point) and no matter how hard he distracts you, come back to the Rock.

Here’s another scene. If it helps, you can imagine The Rock as The Technician.

Technician: You told me to order this spare part but it doesn’t fit.

Supervisor: Did you order the wrong spare part again? Remember last month, you bought the 2 inch pipes when it should have been 3 inch?

Technician: I couldn’t read the writing on the order form.

Saw what just happened? Check the Bingo Card. Digression (Change the Narrative), Victim Blaming and maybe an insult thrown in – Humiliate (if you’re under 35).

Technician: You told me to order this spare part but it doesn’t fit.

Supervisor: Did you order the wrong spare part again? Remember last month, you bought the 2 inch pipes when it should have been 3 inch?

Supervisor: You should have checked before ordering.

Technician: I did. And you were very clear it should be this one.

Supervisor: Eh, I would never say such a thing. How dare you blame me.

Document all instructions because psychopaths won’t take accountability. And even if you did document it, they will play the twisting game.

Supervisor squints at the purchase order he signed with his reading glasses.

Supervisor: You idiot. 2 inches means inner not outer diameter. It doesn’t say so there. You’re supposed to know these things. What am I paying you for?

Psychopaths are very good at wriggling out of what you thought was a clear instruction. 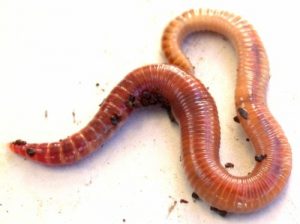 Try and cover as many bases as you can. With every change in instruction (it will happen!), confirm by e-mail. They may not reply as they need the wriggle room in case they are held to what they said subsequently. “I didn’t see your e-mail,” they may lament further when confronted. An easy denial for ex Volkswagen CEO Martin Winterkorn when allegations that he had been sent the report about the diesel engine fraud, months before the fraud became public.

It is a good idea to copy others on the e-mail, to cover yourself. Note that a wounded psychopath can get vicious if he feels accused by e-mail and will attack you back copying everyone including the bosses. So handle this with care. I know of people who e-mail one on one, but will send a copy to a trusted colleague just in case.

Isn’t this exhausting? And I’m not even talking about the vicious psychopathy in full display on Twitter!

Psychopaths lie. Convincingly. You believe your boss and act based on a statement he made. “Yes, of course the vendor has all the valid certification to do the job.” You instruct the vendor to do the work without verifying his statement. An accident happens. There were no certificates. Your neck is on the line. He will deny he ever told you.

Despite the pressure he puts on you, “don’t you trust me?”, insist on evidence before you act.

Psychopaths are predators and can sniff their prey’s weaknesses. If you set clear boundaries between you and the harasser, you are less vulnerable.

It’s clear you need to stay centred and be confident in yourself. Develop strong self awareness.

You are not alone. You may think you are the only psychopath’s victim because they made you feel special in a twisted way. If you start opening up to other colleagues, you may find they had the same experiences. It is a relief to know that you’re not the only one suffering. Start talking.

Get support higher up. Speak to someone. Your manager, another manager, HR, Legal. Ask for help. Counselling if need be. Many people develop anxiety after a brush with a psychopath. With a supportive network, you feel stronger. They can also give you feedback that you are competent, especially if you’ve lost your self esteem.

What if no one listens?

You’re at your wits end. You can’t escape your predator, but the company won’t help you. What do you do? Next, in Part 4 of The Slap, I will explain what companies should do with psychopaths in their midst and employees’ remedies when their employer fails to act. In the meantime, keep an eye on Uber and Wells Fargo.

Learn more about handling harassers at my workshop with the Kuala Lumpur Bar on 20 June 2017. Details here: http://klbar.org.my/events/gedc-seminar-on-speak-up-handling-harassment-and-raising-issues-in-law-firmsworkplaces-on-20-june-2017/

Calm Voices in the Covid Storm