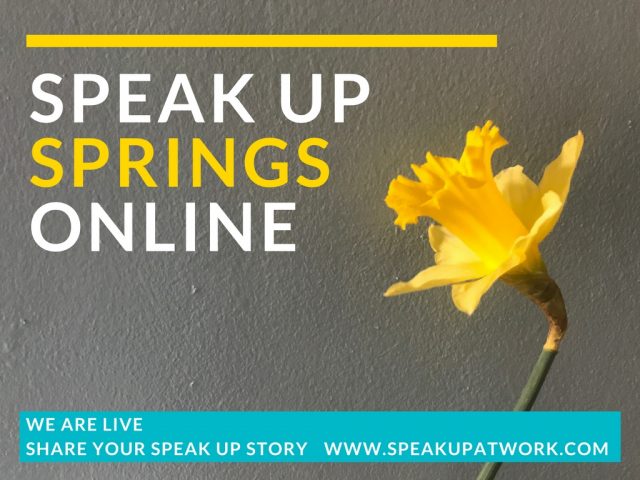 Speak Up has it’s own voice now on the Internet: www.speakupatwork.com

In a world wide web full of noise, who’s listening? Well we are!

I know that you, like so many people who’ve worked in the corporate world, in hospitals, factories, out on the field, have spoken up at work because you are passionate about doing the right thing. But very quickly you learnt that others just didn’t want to know and your organisation wasn’t interested in listening. So you kept your head down and stayed silent. After all you want to keep your job.

Since I started writing about Speak Up issues, people from around the world have shared their stories with me.

These stories deserve to be heard. Some have gone public but others fear the backlash.

This is why I’ve introduced the Speak Up Stories platform which allows anyone to share their story anonymously. As we share more stories from around the world, this will gain momentum and can help create the change you want to see. Making workplaces safer and happier. See how #MeToo has begun changing workplaces!

I know by speaking to leaders, that they are interested in hearing your concerns. Unfortunately the culture, the structure and the people make it difficult for many leaders to hear their people.

How do we get organisations, leaders and decision makers to listen?

By sharing our #SpeakUp stories.

Share your story here if you encountered wrongdoing, and tried or wanted to speak up at the workplace.

Tell us about the wrongdoing and what stopped you from speaking up. What happened when you did? It’s anonymous and as we can’t verify the stories, we won’t allow real names.

Sharing your story may not impact change immediately at your workplace. But your story will help others who have felt alone, suffered retaliation and anxiety. They in turn will feel moved to share their stories. It’s cathartic. Each story is a ripple which over time creates waves of change.

If you are active in creating change for organisations through compliance, an open and safe culture or through empowering leadership, then become a Speak Up Champion. The Speak Up platform is available for you to share your thoughts and expertise. I foresee a group of us collaborating to help organisations around the world.

Speak Up. We are listening.

Dear Leaders, 6 Clues Your People Are Hiding Things from You