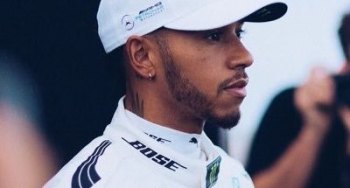 Lewis Hamilton, did you ask your nephew before you put the video up for the whole world to see?

Twitter Sphere went ballistic on Boxing Day. The target? Lewis Hamilton. Hamilton recorded his young nephew in a beautiful purple princess dress. The boy was thrilled to be given the dress as a present. I’d have been thrilled too. I mean, have you seen how dull the colours of boys clothes are compared to girls’? It gets worse for men. Men’s clothing sections are dreary with browns, greys and dark blues. Even the music feels duller. I strayed into one, two weeks ago looking for a present for my sister’s boyfriend. My daughter and I felt constricted with the lack of colour. We left quickly and bought him a game instead.

Boys deserve brightness in their lives. It doesn’t have to be all guns and cars. But the world’s number one racing driver has a reputation to live up to, no? Hamilton disapproved of his nephew’s present and made it clear in his Instagram post.

In the video, he said: “I’m so sad right now. Look at my nephew,” , as the camera focuses on the boy.

“Why are you wearing a princess dress? Is this what you got for Christmas?” he asks, as the boy nods delightedly.

“Why did you ask for a princess dress for Christmas?” he goes on. “Because it’s pretty,” the boy replies enthusiastically, waving the pink wand.

Reproduced from The Guardian

Backlash came speedier than the Mercedes down the F1 straight.

Hamilton deleted his Instagram post. But not before several had managed to capture the video and continue sharing it.

But then so did a few of the angry hoard: You shared a video of a young child without his consent. For obvious reasons I am not providing the links.

This video will be around forever. The boy will grow up and have to face a video of him twirling in a dress which will, like it or not, invite hate. One day someone, school bullies, jealous colleagues, will dig this up and shame him – no matter how much he lives this down. We are, unfortunately, not yet in a world where a boy in a princess dress is normal or celebrated. He may not feel affected by this right now, but the moment he hits his teens, he may very well face identity and self esteem issues. He may want to hide from the world, or go, hell yeah, this is me, deal with it. Whichever way, he will be affected.

His parents are going to need some professional help for their son.

So Lewis – you did not post this video to show how happy your nephew was. You did it to show your disapproval, and as a sports idol, perpetuated toxic masculinity.

In My World, Justin’s The Real Man!

Let’s compare you to Justin Baladoni whose recent Ted Talk, Why I’m Done Being “Man Enough” went viral when he admitted that men had to discard that tough macho image. It was time for men to embrace their femininity. Your nephew is a role model – giving boys and men permission to embrace their true selves. It may not even be an LGBT+ issue. Is there anything wrong with a heterosexual man who says to hell with the throat choking ties and embraces colourful gowns?

If you fall into the whole “men must be men”, must you use your nephew to make that point? How about just saying. “I’m disappointed with the parents who gave their son a princess outfit for Christmas + rant”. You don’t have to say it’s your nephew, let alone show his video. So when your dissenters attack you, they don’t drag a specific child into the fray.

Did you ask him if you could share it on social media (adding that millions would see it), did you ask his parents?

How My Daughter Trained Me

My teenage daughter gets to see every photo of her I post and share privately. She requires I get express consent BEFORE posting. This is what happens when you train your child on her rights. She takes consent very seriously.

I may be her parent, but one thing is clear – it is her image, her body, her identity. Even a three year old is entitled to refuse consent. When we override our children and post, the message we give them – I have more rights than you do over your body and image. Once you get into child sexual abuse, this gets murky. A child that is taught that she has less rights over her body than an adult will allow an adult to touch her even when she feels unsafe.

How We Teach Children About Consent – We Ask Their Consent. It’s not Rocket Science!

I have told some parents privately to be careful of posting images that show their children (even very young ones) in states of undress or crying. We need to accord our children the same dignity and respect we would give adults. Would you post your colleague in tears without his permission? Would you post a video of your best friend throwing a tantrum? What makes you think its ok to post a photo of your child crying?

I could not watch the video of the bullied boy, Keaton Jones, crying. I understand the problems surrounding bullying, but do you need to strip a child of their dignity in making your point? What kind of parent would want to post that? The irony is that Jones, and his mother who posted the video faced bullying worldwide after racist allegations emerged. She deleted her post.

I’ve been told the boy asked for the video to be posted on social media. He’s 11. Let’s go back to the concept of consent. If ask a three year old, “can I post your photo,” I’ve taught him that I respect his opinion and that he has ownership over his image. I’ve taught him to ask permission – and he will do that with his friends, especially girls, as he gets older.

Yet, a Child’s Consent Doesn’t Relieve You of Responsibility

A child however, is not capable of consent in the way an adult is. They can be influenced, they can be scared, groomed or under the sway of a charismatic adult. This is why we have the age of consent in laws. The United Nations Convention on the Rights of the Child regards a child as anyone under the age of 18. A person under 18 cannot consent to sex. It would be rape, whether forced or not.

So while a three year old may think it’s hilarious to share a picture of him jumping into a river starkers – you the adult has the wisdom he doesn’t. The photo could be copied by pedophiles. Someone, maybe a high school bully may find the photo years later and send it to the entire year. You the adult need to think of the risks. A three year old depends on you to make the wise decision.

The media is subject to strict laws on the identity and images of children. I think it’s time the laws should cover the public. Even parents, uncles and aunts don’t seem to understand how to protect their children. Look at Lewis Hamilton and Kimberley Jones. Did they even stop to think of the consequences on these two boys?

Poor Keaton will be known for a long time as the racist child who cried about school bullying. Can he live this down when he applies for university, when he wants to join a reputable employer? Thank you Mrs Jones for singlehandedly destroying your son’s future.

And for those who continue to share it in the name of a child’s right? Yes, his uncle was stupid. But you spreading the video – you know better. You are putting a child in a very vulnerable position while loudly shouting out his rights. Where is your wisdom?

As an activist, I learnt about the darker world of child sexual abuse. See my journey with Projek Layang-Layang and the development of child protection laws in Malaysia in How Your Outrage Created the Child Sexual Offences Law.