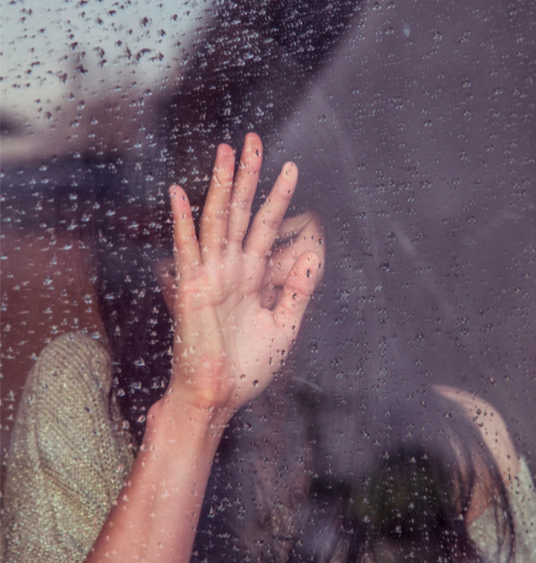 “Why didn’t she report it?” is a common response when a woman, or for that matter a man, reveals years later that they were sexually harassed, assaulted, or even raped.

The TLDR answer: The tables are turned and the victim is punished. By the law enforcers, employers, harassers and society.

For the longer answer, read on…

In the space of the last 24 hours, two Malaysian cases rocked the media.

A rape victim went to a psychiatrist for therapy. The psychiatrist started sending her sexual messages on WhatsApp including photos of his own penis. In session he asked her sexually probing questions about her rape.

A psychiatrist understands the deeper workings of the brain and is very able to manipulate a vulnerable patient. But of course, they won’t. They are bound by the Hippocratic Oath: Do No Harm. Dr Gurdeep Singh violated the oath and her trust, knowing full well how this could destroy her. It begs the question… how many others?

She reported him to the police and the Malaysian Medical Council.

The hospital fired him. No word from the Council. The police investigated and he was charged. Yesterday the court discharged the accused (discharge not amounting to an acquittal) because the deputy public prosecutor didn’t have the investigation papers.

Of course there is an outcry, and the legal minds respond: well he wasn’t acquitted, he can be charged again. It’s not uncommon.

Let’s think about this a moment: what is this decision doing to the victim? As it is, she is dealing with her rape trauma, then the shock of being preyed on by her psychiatrist, and now the legal system, dragging her along. Imagine that sense of betrayal. Who can she trust?

What message is that sending to other victims?

Reporting your violation is a dangerous journey.

Journalist Tashny Sukumaran went to see Dr Ruban Nathan for a skin problem. During the consultation, he touched her thigh, she felt violated and shared her experience on Twitter. 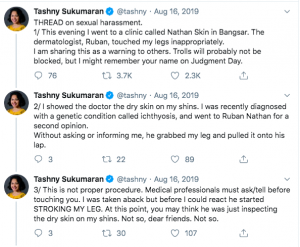 In Malaysia this was momentous. It was the first real #MeToo where the alleged perpetrator was named. Her post went viral as others messaged her or tweeted their own experiences with this same doctor.

She made a police report, but this is the problem. Sexual harassment is not a crime in Malaysia. Molestation is a crime, but the prosecution need to prove both act and intention beyond reasonable doubt. CCTV evidence confirmed he touched her leg but he explained that he was checking her skin. She felt uncomfortable and violated at the time but couldn’t voice it (which is common in sexual harassment situations).

His intention and her discomfort won’t show up on a CCTV recording. When it becomes a She Said – He Said situation, the more evolved jurisdictions go deeper – looking at the demeanour of the parties at the time, and interviewing others who know, or also claim to have been violated by the accused. It is not clear if this happened. The simplest way out is for authorities to declare the lack of evidence and stamp NFA: No Further Action.

I am not surprised the case was dropped.

But for now, let’s just borrow the only statutory definition of sexual harassment in Malaysia, under the Employment Act:

“sexual harassment means any unwanted conduct of a sexual nature, whether verbal, non-verbal, visual, gestural or physical, directed at a person which is offensive or humiliating or is a threat to his well-being, arising out of and in the course of his employment”

Nothing about intention, but rather – unwanted conduct. The test lies in how the victim felt, within reasonableness.

Tashny didn’t stand a chance in the legal system.

Yet she wanted to raise awareness, to warn people about this doctor, knowing full well there would be a backlash. For that she was punished. Not only was her case dropped for “no further action” but she was charged with criminal defamation. Within hours of her publicising this fact, the AG withdrew the charge. Dr Ruban has also threatened to sue. 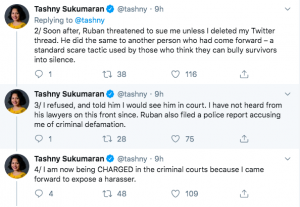 Just weeks ago, news broke of a young British woman who was charged in Cyprus for falsely accusing 12 Israeli men of rape. While Tashny’s case is not at the levels of horror of the Cyprus case, the acts against a reporter are similar: If you can’t prove your case, we will act against you instead.

In all three cases – the state punished the victim for reporting.

In Scotland, Jan Cruickshank was fired after she told her employer that a colleague had sexually harassed and raped her. She had been questioned by her HR, including why she had not said “no” more than once. They chose to believe her rapist’s version that it was consensual. The police did not charge him as “he had given a “no-comment interview”, and without corroboration could not be charged.”

Jan says she was fired from the job she loved. She is concerned that speaking up and publicising her case in the media makes her unemployable.

3. Often it’s the harassers themselves that punish the victims.

Before #MeToo and Weinstein blew up, I had written about why women stay silent when sexually harassed.

With #MeToo, many women overcame their fears and with solidarity, broke that silence. Reporters Jodi Kantor, Megan Twohey (New York Times) and Ronan Farrow (The New Yorker) wrote about the sheer intimidation and spying tactics that were used to stop these women from speaking to them. In She Said, Jodi Kantor recalls how Gwyneth Paltrow called her in a panic when Harvey Weinstein arrived early to a party fuming, believing Paltrow to be speaking to reporters about his exploits. 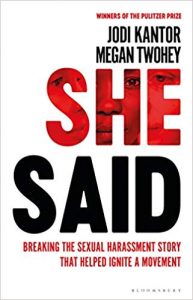 Weinstein’s victims and witnesses were terrified and for months, no one wanted to be the first to go on the record and be named. They needed to know that others would do the same.

The stories told independently to the reporters followed the same pattern. Weinstein would sexually assault his victims. If they resisted – they found themselves in the Hollywood wilderness, untouchable.

The power a harasser holds over his or her victims is huge. In Catch and Kill, Ronan Farrow writes about how NBC reporter Brooke Nevils was too afraid to stop Matt Lauer raping her because of who he was at NBC. 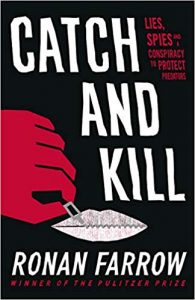 Weinstein knew that Rose McGowan was talking to reporters and writing her own book. He hired private investigators to dig up the dirt on her and other women he considered a threat. That information was fed to the media. Discredit his victims before they had a chance to expose him.

I have seen my friends on social media speak ill of these women.

Which leads me to…

You only have to read the comments to any news report on rape or sexual harassment to see how complete strangers blame the victim.

And the final one – which is the reason I wrote this piece…. “Why didn’t you report it?!”

Is it Safe to Report Sexual Harassment? 6 Issues to Consider before you Report

The Loyal Engineer who got sent to Jail

Being a Rock among Psychopaths at Work

Is it Safe to Report Sexual Harassment? 6 Issues to Consider...