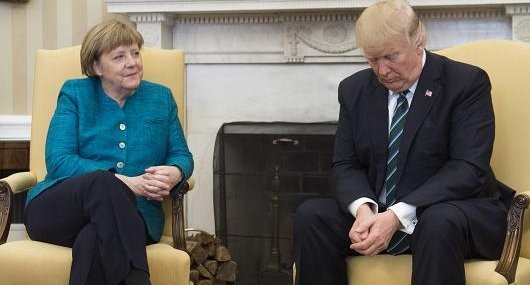 Men, have you hesitated to shake a powerful woman’s hand?

Women, have you been faced with a man who won’t shake your hand?

What is going on here?

The handshake is that introductory ritual we humans have developed, a step above the cat and dog bum sniffing. The firmness of the grip, the slight bow of one party’s head determines who holds the power. For two leaders it starts a bond, that of equals – if they get the handshake right.

But if you don’t shake my hand, how do we establish our bond?

We can speculate all we like over Why Won’t Donald Shake Angela’s Hand? My theory is that he can’t handle the fact that a woman can be powerful, and in Merkel’s case, lead one of the world’s largest economies while holding a shaky European Union together. WOW – Woman of Wonder. He is intimidated by her!

Some men feel more comfortable holding a woman’s hand than shaking them.

Many women who have climbed to senior ranks in the corporate world recognise this all too well. Hands up (because that’s what women do to get attention) if you are not immediately acknowledged by guests as the leader in the room, or you attract looks of astonishment or – and this takes the cake – your guests will not shake your hand.

I’d like to hear from the men why this happens.

I know some men do it for religious reasons. They feel they cannot shake the hand of someone of the opposite sex. While I tell myself to just smile and respect their beliefs, I watch how they cheerfully greet the other men in the room with vigorous handshakes. Me? I receive a cursory nod and nervous smile.

I have just been exiled from the Old Boys Club. Subliminally they are telling me I should not be there amongst them at this important senior meeting. Deep down inside, I don’t want to be there. I don’t feel welcome. Yet I know it’s important that a woman is present because men need to get used to us being among them in the C-Suite and Board levels. I have to fight extra hard to belong, to be accepted. And it’s exhausting.

Us women need to quickly suss out each man that comes into a room. How will he treat me? As his equal? Is he conservative? Will he accept me? We look for micro clues and make small gestures to see if a handshake will be welcome. We could easily be cautious and chose to keep our hands away, but I am painfully aware of the message that I am sending – “I am not important enough for you to shake my hand”. I will give a man a split second to make that first move failing which I offer my hand (that sentence can so easily be read another way!)

If you wonder why women are not making it into enough C-Suite positions of a company, check out the handshake ritual.

Women are told how to behave if they want to get into senior corporate positions. Well I am now telling the men this: if you can’t bring yourself to shake a woman’s hand, you do not deserve to be a leader. You cannot lead one gender and not the other. Get used to the fact that Boards and management teams are becoming more diverse and you need to accept women playing leadership roles as much as you accept the men.

Animah Kosai advocates Speaking Up in the corporate world. Follow her on LinkedIn for more articles.

How The World’s Harvey Weinsteins Deprive Us of Talented Women